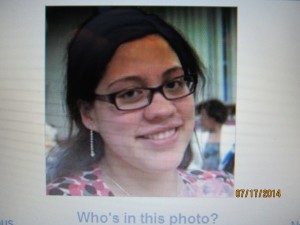 Yesenia Arango (25) passed away on Monday, July 14, 2014. She was born in White Plains Hospital on June 26, 1989 and graduated from White Plains High School; she was pursuing her degree as a pharmacist at Berkley College.

She was married to Frank Javier, she is also survived by her daughter Addison, her mother, Mirvella Dulato and father, Nilson Arango and three brothers; Niel, Cesar and Daniel; her sister-in-law, Sasha her two aunts, Monique and Milagros and grandmother Maricela Olaya.

Her beautiful smile and lovable personality will be missed.

Funeral services will be at 10 am Friday, July 18, at the funeral home, interment will follow at Mt. Calvary Cemetery in White Plains. –

She was a friendly and courteous fixture at CVS Pharmacy in White Plains where she was employed.

I first met her when she joined the  crusading Church Street School Challenger in the late 1990s when I and Rose Aronin, and later Karen Amadio, and Dianne Averill  worked with her and the other Challenger news reporters 8,9, and 10 year olds. That group of inquisitive irregulars were such an inspiration to me that when my daughter left Church Street I founded the White Plains CitizeNetReporter because I knew I would miss the news excitement.

I owe her and the other youngsters, 3rd, 4th and 5th graders I worked with for their bringing me back to what I was born to do report  news and crusade for truth, justice and the American Way.

You know we adults all think we need to teach kids, but in the long run, they are teaching us just as much — innocence, loyalty, effort, integrity, wonder. These are not insignificant things.

If a well known politician, leader, athlete, businessperson or rock star died yesterday afternoon, there would have been blaring headlines…personal retrospectives…accolades.

However, Yesenia who was making her way as a working mother, building a stable career with hopes for the future is just as worthy as remembering and saluting as any famous person is.

She was a big little person who at least in my case, did me a world of good, knowing her in her younger years. I was always so happy to see her at CVS when I picked up prescriptions. And, what was even nicer, she always remembered me, too.

She in the way she responded and pursued stories running around that elementary school, raised a spark in me long gone, did away with my cyncism of the past.

Kids teach you too. Yesenia was a teacher and an example to all in her too short life.

Let’s do better in the time we have left.