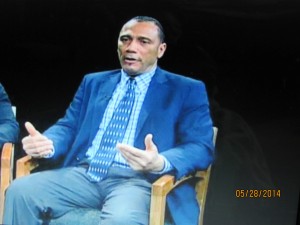 Charles Morgan has fallen  120 signatures shy of the number of signees needed to force a Democratic Primary (800)  with Democratic Party nominee Nadine Hunt-Robinson in September.

Hunt-Robinson will run as the Democrat candidate for the remaining 2015 year of Benjamin Boykin’s unexpired  council seat term.

Morgan told WPCNR exclusively Monday he was short after the primary deadline for signatures passed July 10  and he had failed to achieve his goal of primarying Hunt-Robinson.

He blamed misleading information told him initially by the Board of Elections for his  falling short, saying he was originally told he needed 1,500 signatures to force a primary. When he filed he was told he only needed 800. When he asked Board of Election Officials why they had not told him 800 to start, he was told, “Well, we didn’t want you to fall short by having signatures disqualified.” Morgan felt since he was told he needed 1,500 that he could not make up the difference in time, and suspended his effort, only to find that he only needed 800.

“I could have gotten that,” he said, but cut back his efforts because he felt he would fall way short.

Morgan told WPCNR: “This (The Board of Elections) is set up for people who are in power to stay in power. That’s the way it is.”

Morgan told WPCNR he was reelected district leader for Battle Hill in the Democratic Party.

Mr. Morgan said he was running because he felt Ms. Hunt-Robinson (also an African-American) was not familiar with White Plains and White Plains issues, was not a District Leader and had not been active in the Democratic  Party. He also said he felt that the Ministerial Fellowship of White Plains which had suggested to Mayor Tom Roach, that the former occupant of the seat was African-American that any appointee to the council seat should be an African-American, keeping it a “black seat,” otherwise the African-American community in White Plains would not have any representation on the Council Morgan told the party and this reporter he felt this was wrong, to designate any seat as a seat determined by skin color, ethnicity, or race or background.

Thomas Caruso, who is white and a member of the Democratic City Committee Nominating Committee, after protest had swept the party at Ms. Hunt-Robinson’s selection without consulting the rank and file district leaders, and revelation she was not even a member of the Democratic Party, contested the nomination and was narrowly defeated by Hunt-Robinson in a roll call (not secret as originally reported) ballot of Democratic Party District Leaders. Caruson opted not to attempt to run a primary.

After the vote, Morgan attempted beginning in mid-June to gather signatures to force a primary, walking neighborhoods.

Morgan said it was a good experience talking with voters across the city. He said most he spoke to liked White Plains and the safety of the city. In Battle Hill and the Fisher Hill Neighborhoods (Northwest, and west sides of the city), residents complained about “illegals “ being housed in single family homes. He said his forays into the South End of town told him “FASNY (French American School of New York) was a huge issue.”