↓
Home Menu ↓
Home→Standard Amusements Is All In For Playland BUT Contingent on Rye Litigation Being Finally Settled. Playland-Go-Round Finally Stops Maybe. No Money Yet. 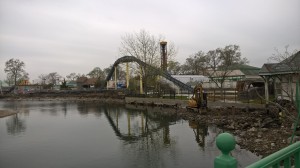 Westchester County has begun its “share” of infrastructure repairs to Playland about a month ago by repairing the Hurricane Sandy 2013 Damage to the North Broadwalk…expected to be complete by November and paid for by FEMA funds. WPCNR PHOTO APRIL 27

WPCNR PLAYLAND-GO-ROUND. From the Westchester County Department of Communications. (Edited for Organization and Content). May 5, 2017

Westchester County Executive Robert P. Astorino and Nicholas Singer of Standard Amusements announced today that they have finalized the construction timetable for making $60 million of improvements to Playland that will revitalize the iconic 100-acre amusement park in Rye and place its future on a firm financial foundation.

Specifics related to the payment schedule of Standard Amusements include:

Standard Amusements will pay the county $750,000, 60-days after a final determination is made with regards to litigation with the City of Rye.

A spokesperson for the County said that the City of Rye has filed a Notice of Appeal after a judge dismissed the city suit for final right of approval to Playland changes last month. The spokesperson said they did not know whether Rye  was organizing an appeal.

Standard Amusements will make another $750,000 payment – to be placed in a special reserve account – to be paid when the Board of Legislators adopts legislation to replace, renovate or remove the pool for future use as a concessions area.

The spokesperson for the County told WPCNR the Board of Legislators has to make that determination whether to romove the pool, that the Astorino administration has not and will not determine whether to remove the pool in order that Standard Amusements can transform the pool area into an upscale catering concession as it wants.

Standard Amusements will take over operations after 50 percent of the infrastructure work is complete, which is expected by November 2018. Standard Amusement’s $30 million investment will go toward revitalizing Playland with new rides and attractions, as well as upgrading food & beverage choices, picnic areas, and restaurants and renovating grounds and buildings.

“Our efforts to save Playland and protect taxpayers through our public-private partnership with Standard Amusements are moving forward,” said Astorino. “Tangible proof is that construction is now set to get under way, and once completed, Playland will be infused with new excitement and experiences to be enjoyed alongside all the traditions, like the Dragon Coaster, that are part of growing up in Westchester.”

As part of the public-private partnership agreement reached between the county and Standard Amusements last May, design work on park improvements has already begun and will now transition into the construction phase, which will take place while the park remains fully operational. 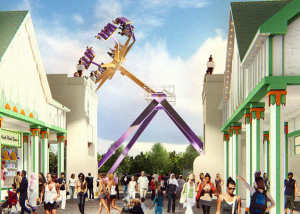 The arrival of new rides and attractions, notably Windstarz, Revolution 32, and Unicoaster, are scheduled for 2019 with more to follow in subsequent seasons. Under the public-private partnership with Standard Amusements, Playland will remain a public, county-owned park.

“We are excited to be part of Playland’s future,” said Singer, a Harrison native. “Our goal is to focus on family fun that will create lasting memories while bringing new vitality into the park. I would like to especially thank County Executive Astorino for his perseverance and partnership.”

County Executive Astorino, Standard Amusements and the Board of Legislators reached agreement last May on a plan to invest more than $60 million into Playland: $30 million from Standard Amusements, which carries with it the right to operate the park for 30 years, and $30 million from the county to pay for 11 capital projects on the property, including refurbishing historic rides, improving structures for games and concessions, as well as shoreline rehabilitation.

Standard Amusements will take over operations after 50 percent of the infrastructure work is complete, which is expected by November 2018.

(Editor’s Note: Westchester County will pay for that infrastructure work, including the renovation of the North Boardwalk and the collonades. Standard will invest in the park improvements.)

Standard Amusement’s $30 million investment will go toward revitalizing Playland with new rides and attractions, as well as upgrading food & beverage choices, picnic areas, and restaurants and renovating grounds and buildings.

The management agreement provides that Standard Amusements will pay the county $2,250,000; invest $27,750,000 million of its money within five years into refurbishing the park; and make annual payments to the county starting at $300,000 and escalating 2% a year. Once Standard Amusements has recouped its initial investment, the county will participate in a sliding-scale profit sharing agreement.