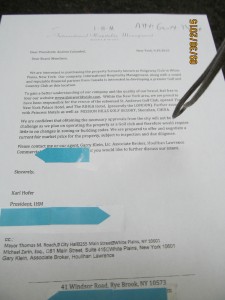 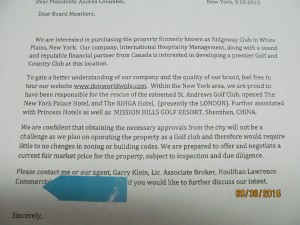 A spokesman for the French American School of New York denied today that the letter reported by the Journal News today as offering to buy the former Ridgeway Country Club from the school would be considered.

Queried by WPCNR this afternoon on who OR what entity revealed the letter, Geoff Thompson, spokesperson for the organization issued this statement:

“We have received a number of unsolicited inquiries about the property, including from a major affordable housing developer. FASNY is not selling the property and, as you know, is actively pursuing its case against the City for the arbitrary and capricious action taken by a minority of the Common Council members that blocked the plan.

We are confident that we will prevail in court and that our school will be built and become a valued member of the White Plains community. The letter to FASNY that was copied to the Mayor and apparently provided to members of the news media is a sideshow.”

WPCNR asked for a copy of the letter, and Mr. Thompson sent us the copy and answered these WPCNR questions

WPCNR: Has the Chairman of the FASNY BOARD told International Hospitality Management the company is not considering any offers?

THOMPSON: Yes, the letter writer will be so informed.

WPCNR: Did the Chairman directly give the letter to The Journal News, was she a victim of theft from her office…did she share the letter and the offers with the Board?

THOMPSON: FASNY had NOTHING to do with the circulation of this letter.  Clearly the letter writer and/or his “agent” distributed it. Interesting that the so called real estate “agent” listed in the letter, Garry Klein, is a member of the Board of Directors of the Gedney Neighborhood Association and a vehement opponent of FASNY.

WPCNR: Will the Board meet to consider entertaining offers for the property?

THOMPSON: No, the property is not for sale.

WPCNR: Could you ask the attorney Mr. Zarin how the unwinding of the Article 78 Suit affects marketability of property…would suit have to be withdrawn? And a new suit filed for damages against the city instead of reversal of the decision as the suit now asks?

THOMPSON: Moot point. The property is not for sale.