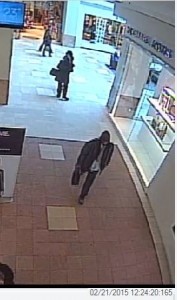 The Tourneau jewelry store in the Westchester Mall was  robbed Saturday afternoon,  the second time the store was victimized in six months.

“On Saturday February 21st at approximately 1230 PM a male black, described as approximately 40 years of age, wearing dark clothing, a dark knit hat with brim, longish dread locks hair, and mirrored sunglasses entered the Tourneau jewelry store located inside the Westchester Mall.
The suspect proceeded to a sales person and asked if he could look at Rolex Watches.  The sales person opened a display case to show the suspect a watch, at which time the suspect displays what appears to be a handgun and a bag and demands the watches inside the display case.
The suspect fled with 8 watches with a value of approximately $160,000 according to Tourneau.
Suspect fled out an exit stairwell and was pursued by a security guard hired by Tourneau.
The security guard lost sight of the suspect and the police were called. No one was injured during this crime.
This case is being investigated by the White Plains Detectives, all tips can be called into the Police Hotline at 914-422-6256 or by e-mail, to www.wppublicsafety.com and click on the crime tips icon.
All information will be kept confidential.”