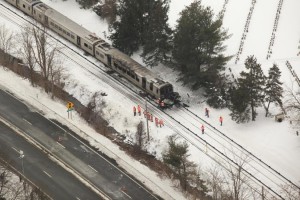 NTSB Safety Team (in orange uniforms)  investigates the aftermath of the Metro North passenger train and car crash that happened on Tuesday evening, February 3, on the day after the accident. (Official NTSB photograph released with today’s Preliminary Report)
WPCNR INVESTIGATIONS EXCLUSIVE! Special to WPCNR By Peter Katz. February 23, 2015:
The National Transportation Safety Board this afternoon released its preliminary report on the Metro-North acciodent in Valhalla in which six people were killed.
This states the facts as developed so far by investigators.
The investigation is continuing, and a final report including analysis and the Safety Board’s conclusion as to what was the probable cause of the accident likely will not be ready until at least the fall, and maybe beyond that time frame.
Here is what the report says:
On February 3, 2015, at 6:26 pm eastern standard time, northbound Metro-North Railroad passenger train no. 659 struck a 2011 Mercedes Benz ML350 sports utility vehicle (SUV) at the Commerce Street highway rail grade crossing, DOT ID 529902V, at milepost 26.6 on the Metro-North Railroad Harlem line in Valhalla, New York.
An estimated 650 passengers were aboard the train at the time of the accident of which an estimated 20 passengers were in the lead car. The driver of the SUV and five passengers on the train were killed.
This highway-rail grade crossing was comprised of gates and warning lights that activate to warn motorists of an oncoming train. Train no. 659 consisted of eight electrically powered M-7 railcars. The collision resulted in a fire which consumed the SUV and lead railcar, MN 4333.The SUV was stopped on the railroad tracks in the highway-rail grade crossing and was positioned in an easterly direction when the railroad crossing gates moved to the closed position. Witnesses reported the driver of the SUV as being stopped in the crossing prior to the gates lowering.When the gate lowered it struck the rear portion of the SUV after which the driver exited the SUV, looked at the back of the SUV, then got back in the SUV, drove forward (east), and was struck by the train.The track speed in the area of the accident was 60 mph. Based on the NTSB’s preliminary review of the train’s event recorder data, the train was travelling at 58 mph prior to emergency braking and the horn was operated in accordance with operating rules on the approach to the crossing.The recorder indicated that the engineer activated the emergency brakes about 300 feet before the collision after observing what he characterized as, “a vehicle partially fouling the crossing”. Event recorder data indicated that in the 4 seconds after initiation of emergency braking the train slowed to 49 mph at which time it impacted the SUV.

The train and the SUV continued northbound resulting in the damage of the electrified third rail on the west side of the track. The third rail detached, pierced the SUV, and then entered the railcar in two locations from the underside at the aft end of the left side passenger doorway.

The train and SUV came to rest about 650 feet from the point of collision. An estimated 480 feet of third rail was damaged. Twelve sections of the third rail, each 39 feet long, were found inside the first passenger railcar.

The NTSB will conduct a metallurgical examination of some of the third rail. Samples from the interior of the lead train car will also be examined by NTSB investigators for compliance with fire protection standards.

The weather at the time of the accident was reported to be 20˚F and with light wind, clear skies, and good visibility. Damage was estimated by the Metro-North Railroad at $3.7 million.

The parties to the investigation include the Federal Railroad Administration, Metro-North Railroad, the Association of Commuter Rail Employees, the Town of Mount Pleasant, and the New York Public Transportation Safety Board.