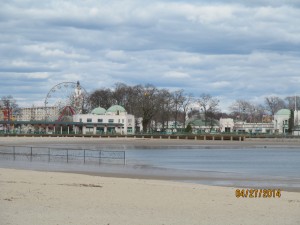 Playland Ice Casino (at far right) on the Boardwalk at Playland last Spring.

The newly refurbished ice casino will open in September after the county has taken two years to repair the rink from Hurricane Sandy damage.

According to the management agreement, the new operator of the Ice Casino will “be responsible for all activities and operations of any kind and nature whatsoever conducted within the Ice Casino, including but not limited to learn-to-skate and learn-to-play hockey classes, public skating, in-house ice hockey programs, kids first hockey program, travel and high school hockey, freestyle skating, summer camps, concessions, special events and seasonal activities, and sponsorships.”

Chairman Kaplowitz cited the agreement with American Skating as the model that Westchester County should employ regarding operations of the amusement park.

American Skating will pay the county  25% of revenue over $1.6 Million, the County Department of Communications said to The Journal News,\. The County Department of Communications did not send out a press release on the contract, and the Board of Legislators did not send out this press release until this afternoon, but that release did not includ details of the contract or why the contract with American Skating is a better arrangement. )

At the Board of Acquisition and Contracts (A&C) meeting on Thursday, August 21st, Board of Legislators (BOL) Chairman Michael Kaplowitz (D) Somers, voted against a $100,000 contract to hire a consultant, Biederman Redevelopment Ventures Corp. (BRV) to analyze the operations of Playland Amusement Park.

The proposal, which will run through November 2014, came from County Executive Rob Astorino.  Ultimately the contract was approved by 2-1 vote.

Chairman Kaplowitz said, “I do not support this consulting contract for $100,000 to review Playland’s operations and make recommendations regarding opportunities for management of Playland Park and its facilities.  I feel the cost is too high and I also believe that this additional review of Playland will jeopardize our chances of finding an operating partner for the 2015 season.”   Kaplowitz noted, “The County Executive has already identified the top three operators for the amusement park through an RFP process.  While the County Executive’s top choice Sustainable Playland Incorporated, did not pass muster with the BOL, I believe that the County Executive’s second and third choices to run the park are both promising alternatives.”

The BOL Committee on Labor, Parks, Planning and Housing will be meeting on September 4th with Standard Amusements and Central Amusements International, the runners up in the County Executive’s search for operators of the amusement park.  The BOL could  vet both of these companies and reach a management agreement in time to hand over operations for next season.