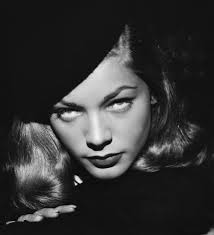 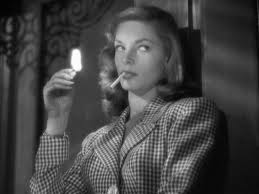 “You know you don’t have to act with me, Steve. You don’t have to say anything, and you don’t have to do anything. Not a thing. Oh, maybe just whistle. You know how to whistle, don’t you, Steve? You just put your lips together and… blow.
Bacall as Slim to Bogey in To Have and Have Not (1944) 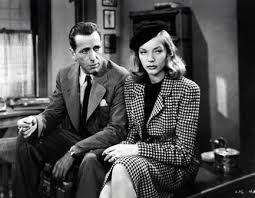 Tinseltown nicknamed her “The Look.”

“The Look”   made Howard Hawks, the producer sign her to a contract at 18 after seeing her face on the cover of Harper’s Bazaar.

I first saw The Big Sleep in the early sixties or late ’50s on a late night movie. She was my first screen crush. I modeled myself after Bogart. The Bacall attitude,  the product of great script writers who included Wiliam Faulkner, she had the moxie, “that thing”  that Cole Porter wrote about, that made  lines live and you believed her hook, line and sinker.

Like all great stars  she was a star from the first and played herself in every movie. That’s what we wanted.

Her movies with Bogart (whom she fell in love with) are classics that still capture the timelessness of attraction between man and woman. Their focus on each other electrified their scenes together. Men wanted to be Bogart.Women wanted to be Bacall.

They said all the right things. You and I need writers to give us those great things to say.

Building her own personna on a model for the tough savvy woman, first created as a Hollywood type by Jean Harlow, Katherine Hepburn, Claudette Colbert, and Myrna Loy, she brought that style to another level uniquely her own:

She was not scatterbrain or calculating, (the way strong women were portrayed to be accepted before Bacall), but sophisticated, classy,  educated, with an appreciation for a man’s man, who had to meet standards to win her interest. She was pretentious and unpretentious at the same time.

She wasn’t a slummer. Didn’t fall for bad boys. To parapharase a line from a Bogey classic movie she was not in, The Maltese Falcon:

“She was the stuff dreams are made of.”

Her voice was low and smoky as the seductive cigarette spirals backlit in her closeups.

No woman or man ever smoked cigarettes better together than Lauren Bacall and Humphrey Bogart.

When she pretended to be weak, I thought it was just an act to give the Bogart character something to do.  I felt if she wanted to, she’d slug the bad guy and deck him. When she lied in a role, she looked so contrite. Well, you forgave her.

She had the best pout in the movies.

So regretful. A lower lip you wanted to kiss. A sullen smoulder without botox.  Her screen kisses,  I swear you could feel.

Her eyes showed  knowing, an “I see right through you, bud.”

Eyes drew you in. A depth that could hold your interest. Her gaze said substance. A softness that melted anger. A temper you loved. Or at least the scripts did.

She also had great lines:  “You know how to whistle, Steve. You just put your lips together and just blow,” (one of the hottest scenes with all clothes on you will see on film in To Have and Have Not.)

In The Big Sleep with Bogart playing Philip Marlowe and Bacall playing Vivian Rutledge (the best client ever to walk into a private detective’s office and sit on his desk–see picture above) we get this saucy sequence:

Bacall: “…speaking of horses, I like to play them myself. But I like to see them work out a little first. See if they’re front-runners or come from behind… I’d say you don’t like to be rated. You like to get out in front, open up a lead, take a little breather in the back stretch, and then come home free….”

Bogart:“You’ve got a touch of class, but I don’t know how far you can go.”

Bacall:“A lot depends on who’s in the saddle.”

You can read the stats: Two Tony Awards, a special Oscar. Her biography. But, she was one of a kind from the start. She worked hard, auditioned countless times. Modeled in the garment district. Ate date-nut bread with cream cheese sandwiches at Chock Full O’ Nuts. Ushered at theatres. Was strongly supported by her mother in anything she did or wanted to do. Her toughness personna in the movies was formed on the streets, stages and audition stages of New York. She came by it with hard work. She wrote her own autobiography without a ghost writer, (By Myself and Then Some), which is a wonderful read and from the heart, I recommend it.

She and Bogart were the toast of Hollywood. They were nicknamed Bogey and Baby. A classic romance.

In the New York Times obituary of Ms. Bacall this morning they include a classic Bacall line. She was frank and outspoken and said it this sounds like a line she might have said in the movies, but it is pure Lauren Bacall:

“You just learn to cope with whatever you have to cope with in. I spent my childhood in New York riding on subways and buses. And you know what you learn if you’re a New Yorker? The world doesn’t owe you a damn thing.”

Bogey is the ultimate  Bacall expert:

“She’s a regular Joe. You’ll fall in love with her like everybody else.”

Lauren Bacall died Tuesday In New York City. She was 89.