↓
Home Menu ↓
Home→Board of Legislators Caucus Stops Just Short of Telling Sustainable Playland: Come Back to the Playland Reviews or Good Bye. Tells City of Rye–You have no Say.

Sustainable Playland declared in a letter three weeks ago they did not want to continue to spend limited dollars in preparing responses to board questions if the board was not going to have the final say in the Playland decision and that the City of Rye was going to have the decision. Sustainable said the ambiguity of what body — the Board or the City of Rye would  make the decision makes tweaking their plan very difficult. 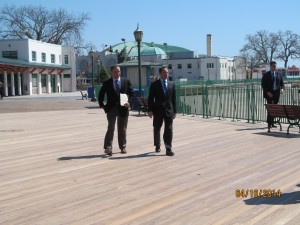 At the opening of the Boardwalk at Playland last week, County Executive Robert Astorino (right) told WPCNR that Sustainable Playland could not proceed with signing contracts with potential developers to implement its plan due to inaction by the Board of Legislators, Kenneth Jenkins lawsuit on the plan and the City of Rye demand a full environmental review and the right of final approval of any Playland development plan . Asked by WPCNR if Sustainable did not have financing to make a payment on Playland debt as promised in their previous plan, Astorino said that was in doubt and that Sustainable was having difficulty raising capital because of the delay in approval of the plan.

Yesterday Sustainable Playland issued this statememt on the situation:

“Sustainable Playland Inc. (SPI), which has been selected by Westchester County to manage the iconic Playland Park in Rye, has not withdrawn from the county’s approval process. Rather we have requested clarity from Westchester County leaders on their vision as it pertains to the size, scope and components of the park going forward. SPI believes our plan is the right approach for securing Playland’s future. Yet it is only prudent that certain legal issues involving the county and City of Rye are resolved, as are varying opinions on what a revitalized Playland should encompass.”

Today’s letter from Sustainable Playland withdrawing from the Board of Legislators review process supports the need for legal action to invalidate the contract entered into by the Astorino administration.

Said Legislator Ken Jenkins (D-16), “It is clear from Sustainable Playland’s letter they now recognize that the Board of Legislators has to decide upon more than the improvements proposed for Playland.   Since 2010, the Board of Legislators has been clear that it has the final say over Playland.  To now, feign surprise and frustration over a process that has been clearly articulated is astounding.”

Jenkins’ attorney Evan Inlaw said the lawsuit against Sustainable Playland and Westchester County will continue in May.

Today, the Board appears to have hardened their stance this statement:

“Democratic caucus members of the Westchester County Board of Legislators (BOL) disputed the assertions made recently by Kim Morque, president of the not-for-profit Sustainable Playland, Inc. (SPI) that the review of SPI’s Playland Improvement Plan (PIP) is preventing efforts to revitalize the County’s iconic park from moving forward.

A recent letter from Morque to County Executive Rob Astorino details SPI’s criticism of the BOL review of the PIP undertaken by the BOL Labor/Parks/Planning/Housing Committee (LPPH), chaired by Legislator Pete Harckham (D-North Salem), and says the legislators are “being asked to judge” the PIP “based on their individual perspectives and sense of how Playland should serve the community in the future, rather than from any shared vision.”

At the request of the County Executive’s office and SPI, the BOL review process of the PIP has been on hold since the beginning of April, ostensibly until legal issues are clarified.

However, as part of their legislative and financial oversight obligation, BOL members raised a number of important issues during a review of SPI’s Traffic and Parking Report at a LPPH meeting on March 25, including repeated requests for financial projections and detailed environmental information.

Since this information from SPI is still outstanding, the organization’s withdrawal from the review process seems more of refusal to put up with too many questions from the County.

“SPI agreed to this review process, so it should have been prepared to face a lot of questions about their planned changes, from top to bottom, at Playland,” said Harckham. “The ball is still in their court. I want to be optimistic that SPI will come to its senses and simply realize that the Board of Legislators is exercising due diligence for all of our residents and taxpayers.”

“It is unreasonable for SPI to argue that a lack of a ‘shared vision’ for Playland’s future is holding up the PIP review process,” said BOL Majority Leader Catherine Borgia (D-Ossining), who guided a review of the plans for Playland’s revitalization last year. “It was SPI’s job to offer a vision of Playland’s future, as spelled out in County Executive Astorino’s original request for proposals, not the Board of Legislators.”

Added Borgia, “If SPI is interested in continuing with this open and transparent review process, which everyone agrees is a necessary step before we hand the keys to Playland over to SPI or any other potential partner, then they are welcome to return to the committee.”

Legislator MaryJane Shimsky (D-Hastings-on-Hudson) said: “The BOL’s mission regarding Playland includes both responsible stewardship of taxpayer assets and overseeing a treasured park that Westchester residents and others can enjoy.  A successful amusement park has long been, and continues to be, the heart of Playland.  I am perplexed as to what SPI finds confusing about this.”

“Playland is a historical recreational facility owned by the all the people of Westchester County,” noted Legislator Ben Boykin (D-White Plains). “It is my responsibility to ensure that it is operated in a safe and economically sound manner, and that it is revitalized to provide amusement opportunities, educational benefits and dining options for the years to come. The process that was established under Legislator Harckham to review SPI’s proposal was fair and thorough. The time to move forward, with or without SPI, is now.”