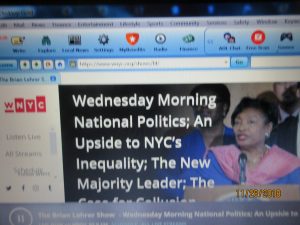 To hear Mr. Lehrer’s interview, copy and paste this link

She said she would initiate discussions on a single payer health care plan for New York State, noting to Mr. Lehrer that such a program has been often suggested, but the legislature has not discussed it ever, and that she would begin such talks. “That will happen she said. She said there was no point because the previous Republican majority in the senate would not consider it.

She brought up a priority on her own: fair funding of less-well-to school districts across the stat: “Where you live should not determine how much aid you receive—get their share.

Asked if  she shared Mayor of New York City Bill Di Blasio’s view that the MTA (Metropolitan Transportation Authority)  should have sustainable funding mechanism, Senator Cousins agreed, but that a “millionaire’s tax” was not an answer she agreed with. “Raising new taxes is not really on the table (to fund the MTA. There’s a variety of opportunities to talk about on the table.”

She said she would examine the sex harassment bill the legislature passed bring it up for discussion to see if it could be made stronger. Senator Cousins said she would be working to increase the statute of limitations on reporting sexual assault and harassment. (“There should be no end date when a person has to make a decision (to report sexual harassment).”

She volunteered that she wanted to explore the issue of codifying the 1973 Roe v. Wade Supreme Court decision into New York State law. New York State passed a woman’s right to abortion in the state in 1970, but did not adapt the Roe V.Wade decision, Stewart-Cousins said because the Republican Party was in the majority for the last 48 years.

On the matter of the legislators receiving a raise in pay to $148,000. She said 20 years without a raise in pay was long enough but felt outside income should be limited to 15% of the pay, but she was waiting until Governor Cuomo’s committee reports their recommendations December 20.  (The pay raise could be voted upon by the currently seated Senate.)

Lehrer asked Cousins her feelings on being the first woman and first African American woman to be Majority Leader and being now one of the “three people in the room,” and not three men in the room (Governor Andrew M. Cuomo and Assembly Leader Carl Heastie also African-American).

Cousins said she “wanted to forge new ground and break new barriers.” Asked if she felt male prejudices against women in previous legislative discussion, Cousins avowed “– not willful but different people bring their experiences.” She said with 14 of the 63 members of the State Senate being women, she would “bring their interlives  to the room”

Lehrer asked what she hoped for as the first  woman and African-American woman to be Senate Majority leader.

She answered, “I do not want to be the first and last person (African American woman)  to hold this position.”