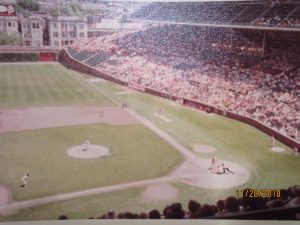 He was the greatest all-around ball player I ever saw: Charlie Hustle.

He got his great nickname, “Charlie Hustle” when Whitey Ford of the Yankees and Mickey Mantle in the dugout during spring training who were watching Pete as a rookie run to first base after a walk.

Whitey wisecracked to the Mick, pointing to Rose “Charlie Hustle!”

The moniker stuck. And it was true.

Rose was competiveness in person. His running to first base on a walk intimidated a pitcher. It intimidated the catcher, and he’d make a quick turn as if to go to second.

He always attempted to take an extra base, though he was not a fast player. And when he slid, he slid headfirst especially in third base. What a play! He’d go airborne halfway between 2nd and 3rd and like Superman fly 3 feet off the infield dirt right at the third baseman. He was a throwback to Ty Cobb, but better. He got clutch hits. He started rallies and he could field every position on the diamond.

He never got hurt. Though his rough play earned him forever hatred in New York because of his fight with Bud Harrelson, the Met shortstop back in the 70s. He also bowled over Ray Fosse the Cleveland all-star catcher in an All-Star game, virtually ending Fosse’s career. Pete played hard and to win all the  time.

He was baseball when he played. Fans came out to see him.

He was a motivater, supplying the winning spirit in  the Philadelphia Philles  helping them to two World Series in 1980 and 1983 after 30 years of Phillie futility.

Pete inspired others to be better. He was a leader.

Yet, because he admitted to betting on his team to win games. Baseball sanctimoniously banned the greatest player of the last 55 years with the most hits of any player of all time from the Hall of Fame.

I am smoking furiously on a White Owl and blasting the typewriter keys in the press box. And I’m drinking black coffee. Rob Manfred, the new Commissioner of Baseball has signed a deal to allow betting on baseball on MGM betting platforms.

Is baseball really serious about sharing official stats data and allowing MGM to include bets on baseball games in their gambling platforms? They’ve already signed the contract.

If there is one game easy to fix it’s baseball.

The Pale Hose of 1919, the infamous Black Sox, 8 of whom took $100,000 from gamblers to throw the 1919 World Series.   Unusual wildness by White Sox ace Ed Cicotte gave Cincinnati the first game. Lefty Williams, a control artist walked the bases loaded in the 4th of the second game and gave up a triple, Cincy hung on for a 4-2 win and a 2-0 lead.

After a White Sox win, Ed Cicotte committed two fielding errors in game four giving the Reds 2 runs and a 2-0 win. They lost the next game, then won the next two then lost the 8th game, (when Lefty Williams in on the fix, coughed up 4 runs in the first) eventually losing 10-5 and the series 5 games to 3.  Bad fielding led to lapses in several White Sox losses in that series. Judge Kenesaw Mountain Landis banned 8 White Sox for life after that series: they were Shoeless Joe Jackson, Ed Cicotte, Lefty Williams, Happy Felsch, Chick Gandil, Swede Risberg, and Fred McMullen. Forever they are known as the Black Sox. Chicago did not contend for a pennant again until 1959.

The 8 players threw the series for money that equaled for salaries for the season.

Now players make a lot more money today. But to ban Pete Rose for merely betting on his own team was making an example.

Now Mr. Manfred has expressed that baseball with its new arrangement with MGM Resorts, would increase attendance. According to the New York Times, baseball attendance was down 4% last season (a season of unusually rainy and cold weather),  to below 70 Million fans, (which is the most attendance of any professional sport other than NASCAR racing I believe).  The Times said it was the fifth year in 6 seasons that baseball attendance had declined.

Manfred and MGM Resorts said baseball will involve fans in during the game  with in-game bets for example. Also would set guidelines for teams and players participating in agreements with gambling promotions. If this isn’t ripe for fixing I do not know what is.

Manfred is killing the game. It is a slap in the face to Mr. Rose.

But it is time to lift the ban on Pete Rose and put him in the hall. He has done his penance.

Pete Rose always inspired the young players, the kids. He taught them hustle, getting the most out of yourself. Perhaps he was weak betting horses and betting on his own team.

But the last 25 years have given us  stars using corked bats, steroids to put up big numbers, break records, and most recently prolong careers. Baseball hardly disciplined this substance abuse and outright cheating and those players who did this are not all banned. One of them is even a national baseball commentator.

The baseball commissioner seems to forget that gambling can develop into an obsession, get bettors in over their heads, and develop into compulsive gambling. Baseball used to be the game that developed character in children and gave them heroes.

Of course we flipped baseball cards as kids a form of gambling that taught us the risks involved in flipping your Mantles or your Musials or Herb Plews or Reno Bertoia cards. You could lose.

Leo Durocher is still in the Hall of Fame, even though his electronic signal stealing in 1951 from the Polo Grounds clubhouse stole a pennant. They have not removed his plaque.

To the fan Pete Rose has been in the  Hall of Fame for a long time.

We don’t remember Commissioners and owners.

We remember the players.