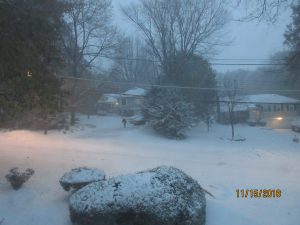 Rush hour in Westchester County has turned into a bumper car mess. Traffic is snarled in central White Plains, with motorists reporting that cars are stalled in intersections due to slippery, uncleared, apparently untreated roads creating slippery conditions on even flat roadways.

It has taken one motorist 3 hours to get from Elmsford into White Plains.

The White Plains conditions, usually with the best snow preparations in Westchester, are inexplicable.

WPCNR advises those comtemplating travel in White Plains this evening not to start out.

The experience one caller told WPCNR was that Route 119 (Tarrytown Road) was at a standstill from Exit 5 west bound on I-287 into Main Street in White Plains. From South Lexington to Bank Street nothing was moving. They also reported I-287 was backed up in both directions.

“I am absolutely shocked there were no White Plains Police officers at intersections to keep traffic moving.”

As of 7:45, the motorist said, Mamaroneck Avenue was clear and plows were beginning to come through.  At point they said they stopped to let a car through an intersection, then they could not get their vehicle moving again. They also said the windshield wipers froze to the windshield.

As of 8 PM it appears to be sleeting.

The roads continue to be horrible. School children have been stuck on buses—caught in traffic gridlock for hours.  And, parents are worried about their children. Some residents report that they have been abandoning their cars on roads –walking home.

That’s a mistake. It makes it difficult for our highway crews to clear the roads and cars left in the middle of the road may have to be towed.  Many fender benders.  Just got a call from a resident whose husband has been stuck on the Saw Mill River Parkway for  two hours.

Received an e mail from a woman stuck on an exit from the Henry Hudson Parkway near Pelham.

Lohud.com reports that the “Thursday evening commute is gridlocked all over. “The number of accidents quickly added up and blocked lanes on almost every major interstate and highway.  Traffic is stop and go for miles. All primary roadways in Pelham and surrounding jurisdictions in Westchester County are currently in major gridlock. All highways are either temporarily closed or at a complete standstill, the Pelham Police posted.”

If one subscribes to the notion that misery likes company –it seems like every community is experiencing similar problems.

Lohud pointed out –—“the slip and slide conditions that caused the high number of accidents Thursday evening and turned the highways into parking lots are because of a thin layer of ice under the snow. When the snow came in, it came in intense, and the ground was very cold so it accumulated quickly….the snow that first fell melted, refroze, and created a layer of ice under the snow.”

Another reason for the problems every community in Westchester and the town of Greenburgh are experiencing: the snow came down around rush hour. Many people left work at the same time. If a car is in an accident – there is gridlock on the road.  Causing hours of traffic congestion.

Many of the roads that have experienced problems (W Hartsdale Ave, Dobbs Ferry Road, Knollwood) are NYS roads. And –the NYS highway crews have not been as visible as we would have liked.

As the evening progresses – road conditions should improve.   I’m staying at the office for a while.  We have all our crews out trying to do the best we can. But, if a truck is stuck in traffic gridlock and can’t move –the highway vehicle can’t do much good for anyone.

Sorry for the inconveniences.   I have been talking with the Deputy Commissioner of Public Works all night and with the Police Chief. We will review what happened. And try to learn from this horrible experience. We will try to do better in the future.