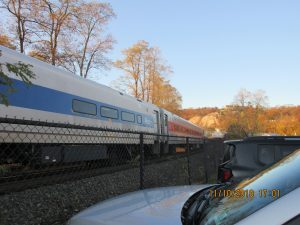 WPCNR ALL ABOARD. From the Westchester County Department of Communications. November 14, 2018:

In a letter to Amtrak Chairman Anthony R. Coscia, Westchester County Executive George Latimer, joined by 45 leaders in a bi-partisan fashion including Westchester’s House of Representatives delegation and the entire Board of Legislators, requested Amtrak’s cooperation in moving the Penn Station Access project forward.  This would provide a critical rail connection for Westchester to the west side of Manhattan and the East Bronx.

Latimer said: “This project would significantly revitalize our region through its creation of a one-seat ride into Penn Station from Westchester for the first time ever. Not only would this save significant time and money for hard-working commuters, it would also alleviate congestion issues at Grand Central Terminal while providing flexibility to the thousands who commute from the Bronx to Westchester each day.”

This project is long overdue. The existing rail lines already exist and the MTA has even agreed to pick up some of the costs of rebuilding certain portions of the line infrastructure to get this project to the finish line. Amtrak has decided to requested additional fees on top of this commitment, fees it does not collect from other commuter lines.

Currently, MTA Capital Construction (MTACC) has a plan to build four new Metro-North Railroad (MNR) stations in the East Bronx that would also service Westchester commuters by connecting the New Haven Line to Penn Station directly. To move forward with this vital project, Amtrak must sign a Memorandum of Understanding (MOU), which is an agreement that aligns work schedules and scope and allows MTACC reasonable access to Amtrak-owned tracks and right-of-way. MTACC was prepared to bring the contract for preliminary design to its Board in May, but this action has been delayed due to the lack of a negotiated MOU.

The letter, signed by federal, state and local officials, goes on to say “Our continued economic development relies on stronger public transportation options and we encourage Amtrak to be a partner in these ongoing efforts. We are calling on Amtrak to come to an agreement on the MOU and allow work to move forward on the Penn Station Access project. Our offices stand ready to assist in any way possible to ensure MTACC and Amtrak can quickly reach a mutually beneficial agreement.”