Sadly, the way “The Great War” ended and subsequent reparations penalties on Germany, was the beginning of a century of war:  the Spanish Civil War,  World War II, the Holocaust, the Korean War, the Vietnam War, the 6-Day War,  the first Iraq War, the Afghanistan War that never ends, and of course the war on immigrants and refugees.

I wrote the piece that follows in 2013 that delivers some of the feelings of about this ironic day. 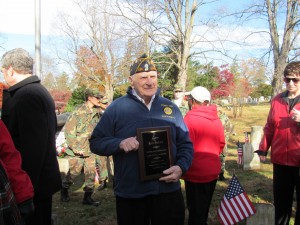 I attended the Veterans Day Ceremony in White Plains Rural Cemetery Monday.  I met Ross Marsico,(above) the 90 year old  veteran of World War II who fought with the Third Army in France, Belgium and Germany. He was wounded by shrapnel, spent 45 days in a hospital THEN returned to active duty.

Mr. Marsico returned to the USA and spent 30 years as an active policeman in Harrison. He was honored as the 2013 Veteran’s Day Honoree

Mr. Marsico is a native of White Plains, just turned 90 yesterday, is an outstanding person to have the honor to meet. When he was asked questions how he felt about being  honored, he said he just represented all the other veterans and every day people who had served, that it was not about him. Then he teared up. 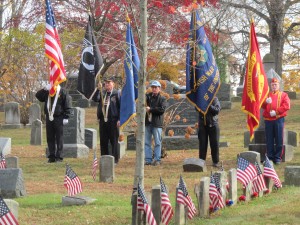 Veterans day makes you tear up.

Chaplain Bob Donnelly of American Legion Post 135 in the invocation observed that the gathering was there to honor persons who had written a “blank check to the United States of America, good for everything including their life in service to their country.” 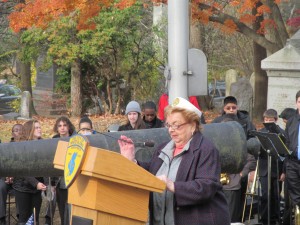 Adele Zucker(above , Past President of Jewish War Veterans Ladies Auxiliary, said  Veterans day was to honor the veterans who came back and have contributed so much to their hometowns in addition to their military service.

Chaplain Bob Donnelly noted that when he returned from the Vietnam war he was spat upon by a woman in an airport and called a baby killer, and observed today’s veterans of the Iraq and Afghanistan  conflicts are much more respected. 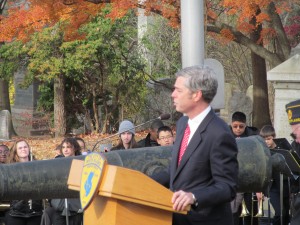 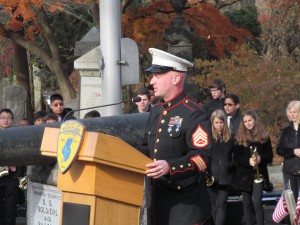 Sergeant Freeland, in his most recent tour, was responsible for training Afghan army and police recruits. He is now head of recruiting for the Marines in White Plains. He mentioned how honored he was to be among the veterans attending, and how it was their and those like them who service that make it possible for him and today’s servicemen and women to perform and live up to the veterans’ example. This  truth was echoed again how you serve matters and it is an inspiration to those who come after you. 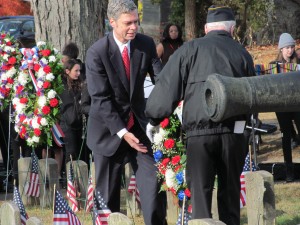 Mayor Roach with Commandant Jack Collins of American Legion Post 135  places the Mayor’s Veteran’s Day Board Wreath at the Soldiers and Sailors Monument. 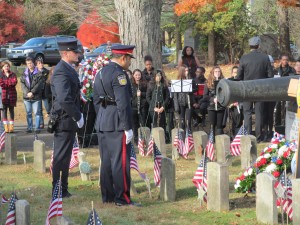 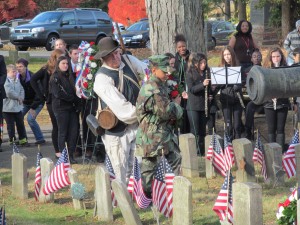 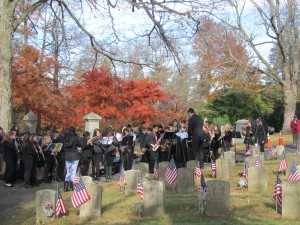 Crisp. Inspiring, evoking the rich traditions and pride and sacrifice of the American armed forces.

As the gathering left, the tent was folded, and the crowd drifted away, until another Memorial Day another Veterans Day.

I remained and watched the tombstones of the Revolutionary War Dead…names no longer readable on the stones, they still spoke as one.

Cemeteries like the White Plains Rural Cemetery inspire by the testimony of the simple stones, the tiny flags denoting veterans and the stones too of every day people of long ago who lived well. As I read their stones I wonder what their lives were like their thoughts, their actions in that long ago time.

Cemeteries are not places of regret, but, instead inspiration to ignite in us, with their  memories, to continue to work on our own lives and live up to the examples of persons like the veterans still with us and those who have departed. 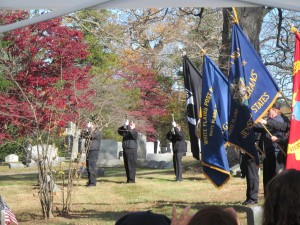 Rifle Salute to the Departed Veterans by American Legion Post #135, was followed by Taps, played by Bob Freis 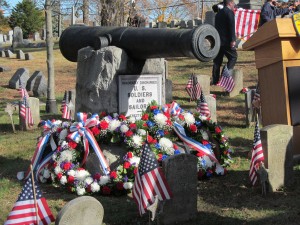 The veterans are getting older.

James Dwyer of American Legion Post 135 was scheduled  to read Flanders Field. He could not  due to illness according to Commander Jack Collins. This is the touching poem penned in World War I, Mr. Dywer would have read. He could not, so I will publish it for him.

In Flanders fields the poppies blow
Between the crosses, row on row,
That mark our place; and in the sky
The larks, still bravely singing, fly
Scarce heard amid the guns below.

We are the Dead. Short days ago
We lived, felt dawn, saw sunset glow,
Loved and were loved, and now we lie
In Flanders fields.

Take up our quarrel with the foe:
To you from failing hands we throw
The torch; be yours to hold it high.
If ye break faith with us who die
We shall not sleep, though poppies grow
In Flanders field 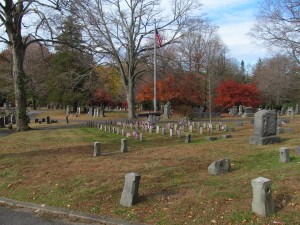