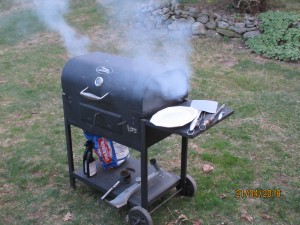 No matter whether you’re a New York Liberal, a Michigan Wolverine, A Trump supporter, or California free spirit, there’s still one phenomenon the country still believes in the American grill.

Thanks to the chimney charcoal starter and its glowing orange coals, the backyard American barbeque DNA macho in the amateur chef was inordinately delayed by the coldest spring in memory. But yesterday it was 50 degrees in White Plains New York USA and the grill was READY!

Steak was raised outside, it was born to be cooked outside, and the barbequed steak puts the Cartier- priced steakhouse in its place!

In this griller’s opinion, outdoor grilling proves once again to be the equal and superior to the overpriced artificial-tasting steak. Sleek decor and atmosphere cannot duplicate backyard origins. The economy may be slogging, your home equity quiting, but  take heart even the hobo can grill! It’s part of American DNA. 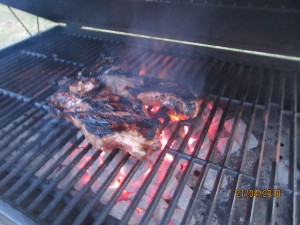 To do real steak right , you have to do it outside on charcoal.

The instinct of generations of the American backyard barbeque tradition passed up from  the cave, enjoyed at Valley Forge. Lewis and Clark bit into venison discovering the Northwest. Cowboys sunk teeth into rare beef around chuck wagons on the prairie and up from the Southland , barbeque inbred and passed on from American father to American son – cutting across nationality and station – gives you real steak – not $100 technology  enhanced cuts. Flaming charcoal makes steak a living thing in your mouth! 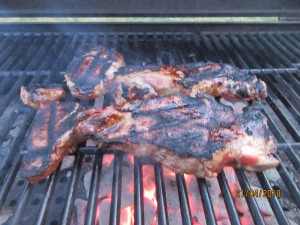 I thought America can pull itself out of this. As long as the American grilling tradition is handed down, the pioneer “can-do” spirit lives!

Why go out for dinner when you can tap your inner griller and say I can cook steak better?  The difference is the air, the smoke, the way marinade just drips down into the coals and gets into the meat. It’s chemistry,  Americans!

What is it about the American Grillman that’s so special that his or hers backyard cuts beat the insider  professionals’ inflation-friendly ostentatious steaks?

It’s the unique chemistry of being American and believing in the charcoal flames.

There’s just something about the searing intensity of glowing charcoal combining mystically with the testosterone and instinctual synergy between red meat and the dedicated outdoor griller –  it beats in taste, juiciness and texture the contrived technology of the most expensive restaurant equipment.

No matter how tasty the megabuck meat is in the swank sticker shock steak palaces, there’s always that articificialness packaged taste that marks the indoor steak. The butteryness. The soft crust of the black topped surface of the indoor steak just does not have the nubile grizzled roughhewn flamed yield of the outdoor one-on-one grilled steak that fights your bicuspids every cilemeter.

The Chimney Starter the Secret.

Pour in a helping of those ultimate black beauties, Kingsford charcoal briquettes into the chimney top.

Fifteen minutes before the wife has the sides ready, take a wooden match to the aperatures in the base of the starter and light up the edges of the newsprint. Within 10-15 minutes you’ve got coals a firey orange red. You’re ready to outcook the pros.

After the Griller’s wife has marinated the meat –  the bone trimmed Porterhouse is sizzzzzzzlllllllllling in the caressing deep searing heat of glowing orange briquettes – 4  minutes a side in 400 degree heat and deft turning and surgical “rareness checks” – the seasoned grillistabalero  simply has a feel for the meat – passed genetically down from generations of American grillers.

The combination of cauldron, flavored steel grill rods and perfect flames creates the grillmark “brand” let’s you know just by looking at the cut, you’re going to get the natural taste of the backyard steak –  No one can do a great cut like you can!

As any redblooded American Grillman will tell you when doing a steak – you can’t deliver a steak by manual or instructions.

You have to feel the meat. Feel it cook. You just know its time. Hearty smoke promising juicy meat that melts in your mouth creates an experience only the grillman or GrillGam knows.

Every cut is not the same. Each deserves a surgeon’s attention to cooking timing and detail. And surgical checks are necessary.

The American Grillman becomes one with the meat. With eye and knowledge of the hue of red – you just  know  by instinct when she’s done. Cooking is slowed down by moving the meats to the side off the heat to keep the American beauties warm

With the wife’s deft presentation, sweet potato fries, corn pudding, fresh beans and mushrooms the Grillman’s natural art creates the taste of the Fourth of July

Get those grills handy and ready to fire up to get that taste of American Independence once again.

When you’re over the grill, you’re King of the Hill. 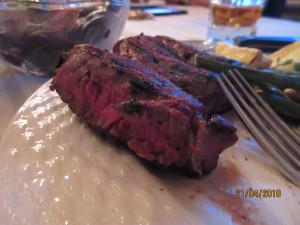