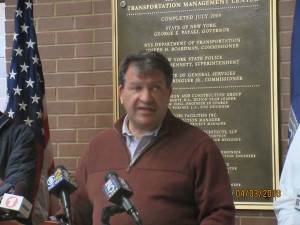 County Executive George Latimer in a news conference late Sunday afternoon said Con Edison was not prepared to handle the storm that blasted Westchester with  45 mile per hour to 73 MPH wind gusts (at Westchester Airport) uprooted hundreds of trees, cutting off power to 72,000 Westchester Customers by Saturday morning.

Con Edison, after crews cleared debris was making up the number of restorations at the rate of about a 1,000 an hour. Since the 4 PM news conference ended at 5 PM yesterday, 12,000 customers (a customer represents one meter), had been restored bring the number in the county without power to  41,654 at 1:30 AM Monday morning.

Latimer praised the county towns and cities public works crews whom he said were ready to clear debris and fallen trees in areas that had lost power, but the mayors of all the towns told him that Con Edison delayed in shutting power to areas where debris had blocked roads, delaying the rollout of Con Ed’s own recovery efforts.

Asked by WPCNR how many cities and towns had reported significant Con Ed delay in shutting down power to the afflicted areas of their towns, Latimer said

Asked what was the average time of delay the towns experienced, Latimer said he did not have an average. Asked if after the roads were cleared, was Con Ed speedy in rushing restoration crews, he and the entourage in chorus, said they were.

Asked as of 4:30 PM what percentage of  the Westchester towns and cities had cleared fallen debris and trees making them Con Ed-ready, a Westchester public safety official said the county did not have a percentage of how many ready-to-restore cities and towns were waiting for Con Ed as of 5 PM Sunday.

Latimer said he and his staff had inspected the damage in Yorktown, Bedford and areas in the north end of the county and said the damage was “devastating.” He began the news conference at the Hudson Valley Transportation Center Sunday  afternoon, announcing  54,000 Con Edison Customers were still without power, and 22,000 customers of New York State Electric and Gas were unconnected.

He said the chief of NYSEG apologized to Mr. Latimer for NYSEG being “unresponsive” to county officials Friday evening and communications had improved.( Latimer had sent out a news release castigating the NYSEG lack of communication. )

Progress in restoring power to Westchester residents who are growing increasingly angry, Latimer said, at 48 hours or more wihout power, has progressed since the 5 PM Sunday hour. A total of 12, 363 have been restored since then according to the Con Edison Storm Center map, leaving 41,654 still in the dark and the cold.

The County Executive said traffic lights at crossroads were still out in a number of communities at 5 PM and motorists should come to full stops before entering the intersections. 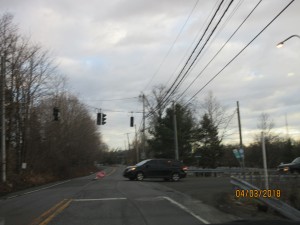 An intersection a half mile from the Transportation Center where the news conference was being conducted had just a stop sign (seen slightly to the left of center  in the middle of the intersection as traffic lights were dark. No blinking caution light. No police presence.  This was the busy speedway of Route 100 at the Hospital Road overpass.

The head of the Public Service Commission said snow in the midwest meant that work crews from Ohio, Illinois Michigan could not be counted on to supplement Con Ed and NYSEG crews.”We are on our own,” he said. He also promised the press the Public Service Commission would be taking a hard look at how the utilities handled this storm damage. A representive from the Governor’s office said 200 National Guardsmen were being sent to Westchester to deploy as the county sees fit. 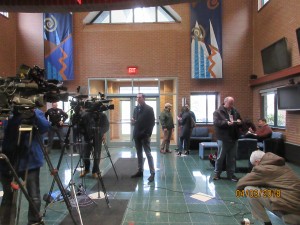 Here is how the Con Ed Storm Center Map shows the outages at 1:30 A.M. Monday morning:

Mount Vernon (either side of the Bronx River Parkway): 45 Outages, 1,617 Customers W/O Power