I interviewed the first African American to integrate the Ardsley schools— Ron Cook— way back in 1965 on WVOX two weeks ago, February 16, 10 AM to 11 AM on WVOX today. I spoke with Ron via telephone from South Carolina, where he is living now and the family where he stayed while he lived in Ardsley, spoke to Ron and me  in the WVOX Studio.  A link to the interview is below .

During African American History month—and every month—we can’t just take the evolution of our community for granted.Mr. Cook was the first African American 15 year old who attended the Ardsley schools –way back in 1965.

He moved from his home in Charleston, SC, never saw snow before his move to Greenburgh. 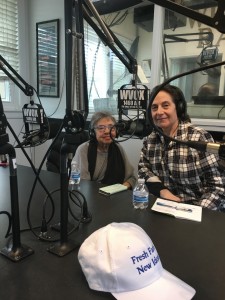 He was welcomed by a great foster family, Elaine Finsilver and her daughter Jane. Jane (Right) and Elaine participated in the the interview  with Mr. Cook in the WVOX Studios (above)

Today, minorities comprise a much larger percentage of the Ardsley school population. In 1965, Ron was the sole African American in the entire Ardsley school system. (There was one Chinese American student in 7th grade.)

What was Ron’s journey like? Was it worth it?

Reflections on 53 years of segregated lives.

In the interview Elaine and Ron recall residents driving up to the Finsilver’s home and spitting on the grass.

And, on graduation day Ron received a standing ovation from fellow students. But–during a graduation party was not allowed to swim in the pool.

I found it hard to believe what I heard.  David Bach co-hosted the radio interview.   PAUL FEINER