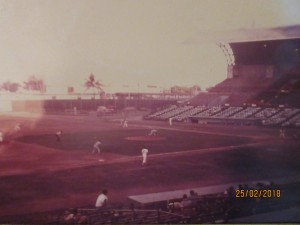 Old Miami Stadium, 1972–site of many a spring training game, in the haze of memory 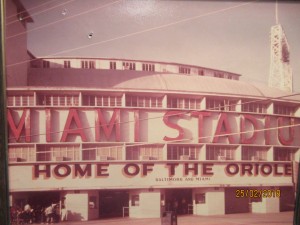 “Hello there everybody, this is Mel Allen greeting you from the gondola at Al Lang Field in sunny St. Petersburg, Florida  along with The Scooter, Phil Rizzuto for the first  Yankee baseball of the spring, brought to you by White Owl Cigars, Ballantine Beer, The Crisp Refresher and Winston–Winston Tastes Good Like a Cigarette Should. The umpires are gathering at home plate with Managers Casey Stengel and Fred Hutchinson of the St. Louis Cardinals for the first home plate meeting of the year. Now with the starting lineups, I’m a rooter for the Scooter, Phil Rizzutto.”

I was 11 years old when I first started listening to baseball on the radio on weekend radio broadcasts in the spring of 1957, when “The babbling brook of baseball,” Mel Allen was the Voice of the Yankees.

The hearty greeting with southern hospitality in his voice and his former Yankee partner, Phil Rizzutto with his edgy city accent just made you feel instantly good.

The buzz and banter of the crowd in the background of the broadcast,  the distinct, gregarious lazy sounds of the spring training fans. The “hope” just shone through your radio or on the car radio as you went on errands  with Dad or Mom, and they were not ball fans. But they let you listen.  They did not let you listen to WMCA or 77 WABC the rock and roll stations in the car, it was always WOR, but they let me listen to The Yankee on WINS 1010.

Maybe it was raining and dreary like this weekend, or cold and the ground white with snow, exhibition baseball was the first harbinger of spring. You knew with the crack of the bat. The “knock” of the ball in Yogi’s glove, the “lookout!” when the foul  ball came back to the press box.It sounded so good again.

It came along  just in time like an amazing throw to the plate amplified by Phil’s “Holy Cow!” the first “Holy Cow” of the new season.

The good thing was the games did not matter. But when you were a kid, they still did. Your team winning was important,when they won you were happy. When Grim or Byrne  or Whitey lost a lead you were still sad.

You wondered if a kid like Gordon Windhorn would stick with the club when he was tearing up the spring in 1958. Baseball stirred  up your hope, the best emotion you can feel short of love and winning and doing the best you could do, fair and square.

But, the best of spring baseball on the radio was, it was only an exhibition game. If your team lost, and often I’d listen to entire exhibition games, it did not hurt as much. The spring training game lazy pace relaxed.

Broadcasters painted a Monet in your mind of green grass, sail boats on Tampa Bay, a chatter crowd, and players doing running in the outfield (“the pitchers getting their windsprints in,  had to duck on that liner”).

When you worried about your homework, a romance not working out, there was always baseball to love. It always loves you back.

(One of the reasons, I married my  wife was she sat through both ends of a doubleheader after driving to the ballpark twice when the Mets waited two hours to get a big gate in the till for a Cincinnati Reds doubleheader in 1969. She could also keep a score card.)

The balls and strikes calls, the drama of whether the rookie trying to make the rotation, like Jason Montgomery in today’s Yankee game reminded you of how nervous baseball is. It’s not what you did last year or yesterday, it’s the next pitch, the next smash, bearing down always.

Getting back in  baseball rhythm—something ballgame broadcasts do for you—especially in spring broadcasts, you learn much more about inside baseball, how players feel, what players did over the winter (they work out), and it rouses you out of worrying about situations you cannot control.

I want to thank John Sterling and Suzyn Waldman for their broadcast today. Those two who have been doing Yankee broadcasts for forty years, brought back that old feeling.

Sterling particularly sounded like an old comfortable friend today his deep tones blending with mix of the game and the play-by-play and talking baseball with Ms. Waldman—I learn something new about the game everytime I listen to them.

I liked Sterling’s description of a fly to left (“High fly ball to shallow left field, he comes in and makes the catch. one away”) You could see the high sky sun flash off the picketman’s shades.

Baseball is here just in time.