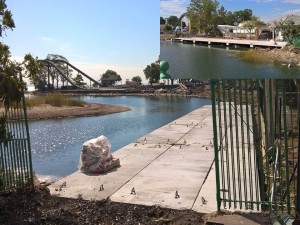 Playland two months ago: North Broadwalk Repairs of Hurricane Sandy Damage (Sustained  in 2013) finally got underway this past fall. The takeover of the park by Standard Amusements is being delayed past December 31 over a City of Rye Appeal of a court ruling that threw out The City of Rye contention it should have final approval of any changes to the park the developer wants to make. The repair  to the North Broadwalk is still not complete.

There will be no closure and no multi-million dollar check from Standard Amusements accepting the lease management deal to manage and makeover Playland this weekend, or sometime to come.

Standard Amusements had been given  until December 31 by Westchester to submit the first payment of  $750,000 eventually to be $2.250 Million  (as stated last April) to begin their 30 year lease on the Playland property. Standard is supposed to invest $27,250,000 in the park rides and improvements. The county was supposed to invest $30 Million in infrastructure, but this was upped in the fall to approximately $50 Million without explicit details explained.

The head lawyer for the City of Rye told WPCNR this will not happen because the city  of Rye has appealed the decision throwing out  the Rye lawsuit in August of this year.

Kristen Wilson, Corporation Counsel for the City of Rye Thursday told WPCNR the city had appealed the judge’s ruling in the suit Rye filed protesting the county right to approve all developments and changes to the park (by any lease/manager)  without the City of Rye “final right of approval.”

Asked if the Appellate Court might expedite the hearing date for the Rye appeal, Wilson said the appellate court does not routinely take cases in the order in which they are filed, but usually it can take up to a year for an appeal to come to a hearing before the  court.

Asked if the new Mayor-elect of Rye might withdraw the suit, Ms. Wilson said she was not aware of the new Mayor’s position, but withdrawal or continuation of the appeal was up to him.

That is because the City of Rye has appealed the court ruling in August, throwing out the City of Rye suit claiming that Rye should have final right of approval of what is built and designed on the county-owned national landmark amusement park, in operation since 1929

In his last three days as County Executive, Robert Astorino’s solution for stopping the annual $3-4 Million debt service of Playland (through leasing it out to private management) has failed.

As early as last month, Mr. Astorino had assured that everything was on track for Standard Amusements coming on board with their payment by the end of the year.

Then came the  request for other proposals, which resulted in Standard Amusements being selected by Mr. Astorino as the best group. After the legislature O.K.’s  a tentative deal with Standard,  discussions with Standard Amusements developed over who would pay for structural repair of the park infrastructure, especially the deteriorating colonnades and the swimming pool, and addition of amenities.

Since a resolution of the legal challenge from Rye, (where County Executive-elect George Latimer lives), is a long way from being settled due to the Rye appeal, (unless the new Mayor of Rye withdraws the appeal, giving the right of final approval to the county), the deal may undergo another analysis by County Executive-elect Latimer and the new County Board of Legislators.

It is worth noting that Mr. Astorino’s efforts to wipe way Playland debt by getting a private leaser to improve the park and increase county revenue has instead ballooned county Playland debt approximately by $60 Million.

When the appeal is granted or denied, you know it will be appealed to the higher Court of Appeals so this may give the County Legislature and the new County Executive George Latimer two years to tinker with Standard Amusements on the deal, or not.