↓
Home Menu ↓
Home→The Bells Are Ringing for the Hunchback of Notre Dame! 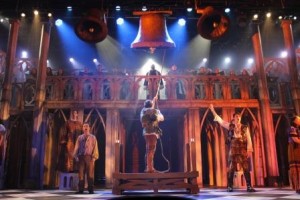 “Bravos” for  Bobby Cassell’s  Quasimodo! He Brings Audience to its feet! 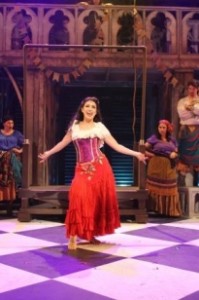 Jenna Dallaco’s Esmeralda a Beauty for the Ages and Heaven as WPPAC Mounts  “Spectacula” Show. Not a broken heart in the house. 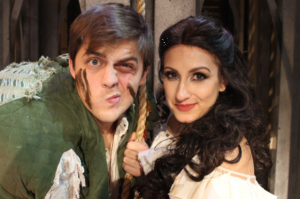 If any time you needed an underdog to root for and inspire you it is now.

Bobby Cassell is that underdog—the WPPAC roared at his blockbuster solo before swinging into the square like Tarzan to rescue Esmeralda in the emotion-wrenching, heart-pounding climax of this over the top show.

The audience rose as tall as they could when the company of The Hunchback of Notre Dame joined in  their  Finale Ultimo. The gentleman next to me to leapt to his feet, then another, and another, clusters, in a wave of a thundering standing ovation for the performance they had just seen at the White Plains Performing Arts Center Opening Night last night.

This is a must-see show. It is seamless! 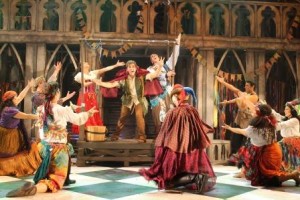 In a relentlessly escalating intensity of a production of this ages old story of Quasimodo, the hunchback befriended by the gypsy Esmeralda in 16th Century Paris, WPPAC has mounted a seamless message of the rewards of doing good and rising to the occasion when action is needed. Christopher  and Justin Swader the scenic designers have created the most detailed and haunting set every a Gothic masterpiece of Our Lady of Notre Dame, with massive bells that Mr. Cassell rings with such joy, he even has names for them. The lighting designer Jamie Roderick uses a gazillion spots to create the doorway to Heaven and portray the back streets of Paris at night.

Zannelli’s character Frollo raised Quasimodo  in the cathedral, never letting him out because of Quasimodo’s deformity.  Frollo hates the gypsies because they lured away his brother who had a child, Quasimodo with a gypsy women. This show is about the destruction of hate and the redemption of the good.

Cassell as Quasimodo is on target portraying a disabled person very realistically, and showing the feelings that every disable person feels which those of us not sensitive to them do not realize. Quasimodo’s existence is made palatable because he talks to the gargoyle statues in the cathedral, who come magically to live.

The gargoyles  have  a great moment in Act Two singing to Quasimodo  that he “is better than this,” trying to get him to intercede and rescue Esmeralda. Cassell answers them in the powerful song Made of Stone

Esmerald befriends Quasimodo when the gypsies mock him as the King of Fools and beat him. She takes pity on him…and takes him into the cathedral.

Ms. Dallacco’s Esmeralda is feisty and a good person. But, of course Mr. Zannelli’s Dom Claude Frollo  is furious at Quasimodo because Esmeralda is a gypsy.

Esmeralda meets Captain Phoebus, Matthew Billman, a guard of the cathedral who is smitten with Esmeralda’s independence after going out for Rest and Recreation and meeting the Gypsies. When Phoebus is stabbed by Frollo, and Frollo blames Esmeralda, she brings Phoebus to Quasimodo for help. Twice Esmeralda escaples Frollo’s clutches with a flash of explosives, and Frollo takes her to be a witch.

Phoebus and Esmeralda combine a wonderful song when things are dark for their love. That song is Someday. It is a song that will tear you up.  In a voice as clear as the bells of Notre Dame she and Quasimodo duet on Top of the World  and God Help the Outcasts.

Everybody stands out in this cast—Jarrad Biron Green, who is the leader of the Gypsies. He narrates the action and orients you to a lot of what is happening. A technique now very popular in Broadway musicals.

There is a choir assembled for this show which rachets up the emotional toll of the show. They sound well, spectacular!

Kudos for the softspoken director, Fran Portanova who has crafted a wonder of a show, motivating every actor and technical expert to create this perfect show. It may be his crowning achievement. This is a tough show to do.

But he and WPPAC did it.

THE HUNCHBACK OF NOTRE DAME plays through January 14. There are matinee performances and evening performances. You can see it today at 2 PM and 7 PM. Go to the WPPAC website www.wppac.com for more information or call the box office at 914-328-1600