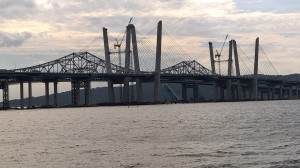 WPCNR FOR THE RECORD. From the Citizen Budget Commission website. October 15, 2017:

Editor’s Note: Friday the following report from an independent citizens commission was released on the Citizen Budget Commission website which was widely quoted as the basis for the reports of a doubling of the toll on the new Mario M. Cuomo Bridge across the Hudson.

However, it should be noted that the toll figure has not been determined yet by the state. Here is the copy of that report as posted on the Citizen Budget Commission website.

(The Citizens Budget Commission (CBC) founded in 1932, is a nonpartisan, nonprofit civic organization whose mission is to achieve constructive change in the finances and services of New York City and New York State government.  Our mission is rooted in serving the citizenry at large, rather than narrow special interests; preserving public resources, whether financial or human; and focusing on the well-being of future New Yorkers, the most underrepresented group in city and state government. The wesbite is at www.cbcny.org)

October 12, 2017
In late August the Tappan Zee Bridge replacement, the Mario M. Cuomo Bridge, opened to traffic. How will the costs of constructing this new bridge be funded?A loan from the federal government, bonds issued by the New York State Thruway Authority, and cash funneled to the project by the State will pay the bills in the short term. In the long term, approximately $2.9 billion in loans and bonds will need to be repaid. The debt service cost should be paid by a toll increase for bridge users, but the Governor and Thruway Authority have remained mum on what the toll will be and when the increase will take effect.Based on current debt projections, the toll could be as much as $10.61 for passenger vehicles; less than initial projections of up to $14, but approximately double the current $5 toll.

History of the Bridge

The idea of a tolled road connecting New York’s major cities was initially proposed in the 1940s. This superhighway would run from Buffalo to western Rockland County and connect the rest of the state to New York City via New Jersey highways and the George Washington Bridge. In 1950 Governor Thomas Dewey changed the plan, bringing the highway all the way to New York City, necessitating a Hudson River crossing. Though other points along the river would have been easier to cross with a bridge, the State selected the Tappan Zee portion of the river because it lay beyond the Port Authority of New York and New Jersey’s (Port Authority) jurisdiction, and thus all toll revenue could be used by the Thruway Authority to subsidize the rest of the system.1The Tappan Zee Bridge opened on December 15, 1955 at a cost of approximately $80 million, or $735 million in 2017 dollars. Though an engineering marvel at the time, the bridge included design flaws, which would lead to a need for costly repairs, or its eventual replacement.2 Those crossing the bridge on opening day paid a toll of 50 cents, approximately $4.50 in 2017 dollars, and local residents could purchase a monthly passbook for $10, $91 in 2017 dollars.3Plans to replace the Tappan Zee Bridge began in 1997 when Thruway Authority officials determined that a new bridge would be more cost effective than repairing the existing span. Though the project’s estimated cost climbed as high as $19 billion at some points, Governor Andrew Cuomo eliminated many of the nonessential improvements associated with the project, received federal assistance in fast-tracking the permitting process, and qualified for a $1.6 billion federal loan.4  After serving travelers for nearly 60 years, plans to replace the Tappan Zee were finalized in 2013.The first span opened on August 25, 2017, accommodating only westbound traffic. Later, on October 6, 2017, the first span began to serve eastbound traffic as well while the old Tappan Zee is removed and approaches are built for the second new span. The second new span is scheduled to open in 2018, and westbound and eastbound traffic will each have its own new crossing structure.5

Tappan Zee Constructors, LLC, a consortium of builders, designers, and engineers, will complete work on the new bridge under a fixed-price, design-build contract.  The bridge’s total cost includes $3.1 billion for the design-build contract and approximately $800 million for administrative and contingency costs.The State is funding the $4 billion Cuomo Bridge with pay-as-you-go (PAYGO) capital contributions and borrowing. Approximately $1.1 billion in PAYGO comes primarily from the Thruway Stabilization Fund.6 The State established this fund in the fiscal year 2016 budget, appropriating $1.3 billion of the money received from financial settlements of litigation with financial institutions won over the past several years. In fiscal year 2017, the State budget appropriated an additional $700 million, increasing the fund to $2 billion. This fund allows the Thruway Authority to freeze tolls on the system through 2020, with about half of the funds earmarked for the new bridge and the remainder for other Thruway Authority priorities.⁷The remaining $2.9 billion cost is financed from two types of borrowing. In 2013 the federal government approved a $1.6 billion Transportation Infrastructure Finance and Innovation Act (TIFIA) loan.8 TIFIA loans are granted by the U.S. Department of Transportation (USDOT) for major infrastructure projects undertaken by states, municipalities, and private partners, and provide access to credit and reduced debt service costs compared to other types of debt. The TIFIA program provides flexibility in the payback period, allowing borrowers to defer repayment up to five years after completion of the project. The USDOT estimates that use of a TIFIA loan, rather than other debt options, will save the Thruway Authority approximately $350 million over 35 years.9 The Thruway Authority has already issued $850 million in bonds and will issue up to $431 million more to cover the remaining costs, depending on whether additional administrative and contingency costs are incurred. Through June 2017, $279 million of contingency costs have been incurred, leaving about $528 million in unspent administrative and contingency costs, suggesting the final cost of the bridge could fall below the $4 billion projected price.10

The estimated $2.9 billion in TIFIA loan and Authority bond proceeds will require a revenue source to fund this borrowing. The Thruway’s TIFIA loan application included an increase in the new bridge’s toll as a means for financing the TIFIA debt.11 The delayed onset of the TIFIA payback period allows the Thruway Authority to postpone any increases through 2020; the extent of the toll increase on the Cuomo Bridge, or toll increases across the system that will be required after the freeze ends, remains unspecified.

Increasing Tolls on the New Bridge

A toll increase on the Cuomo Bridge is an equitable means of funding the project: the cost of the asset is borne by those benefiting from it through increased user fees. The State’s TIFIA loan application estimated a round-trip toll of $14 for passenger vehicles and $8.40 for commuters.12  These estimates assumed the bridge would cost up to $5.4 billion and be financed entirely by federal and state debt.13 Based on the updated estimates, which include cost savings from the design-build contract and reduced debt from the use of Thruway Stabilization funds, the new tolls would range between $9.67 and $10.61 for passenger cars using E-ZPass, and $6.74 and $7.45 for local residents with commuter toll plans. (See Table 2.)14 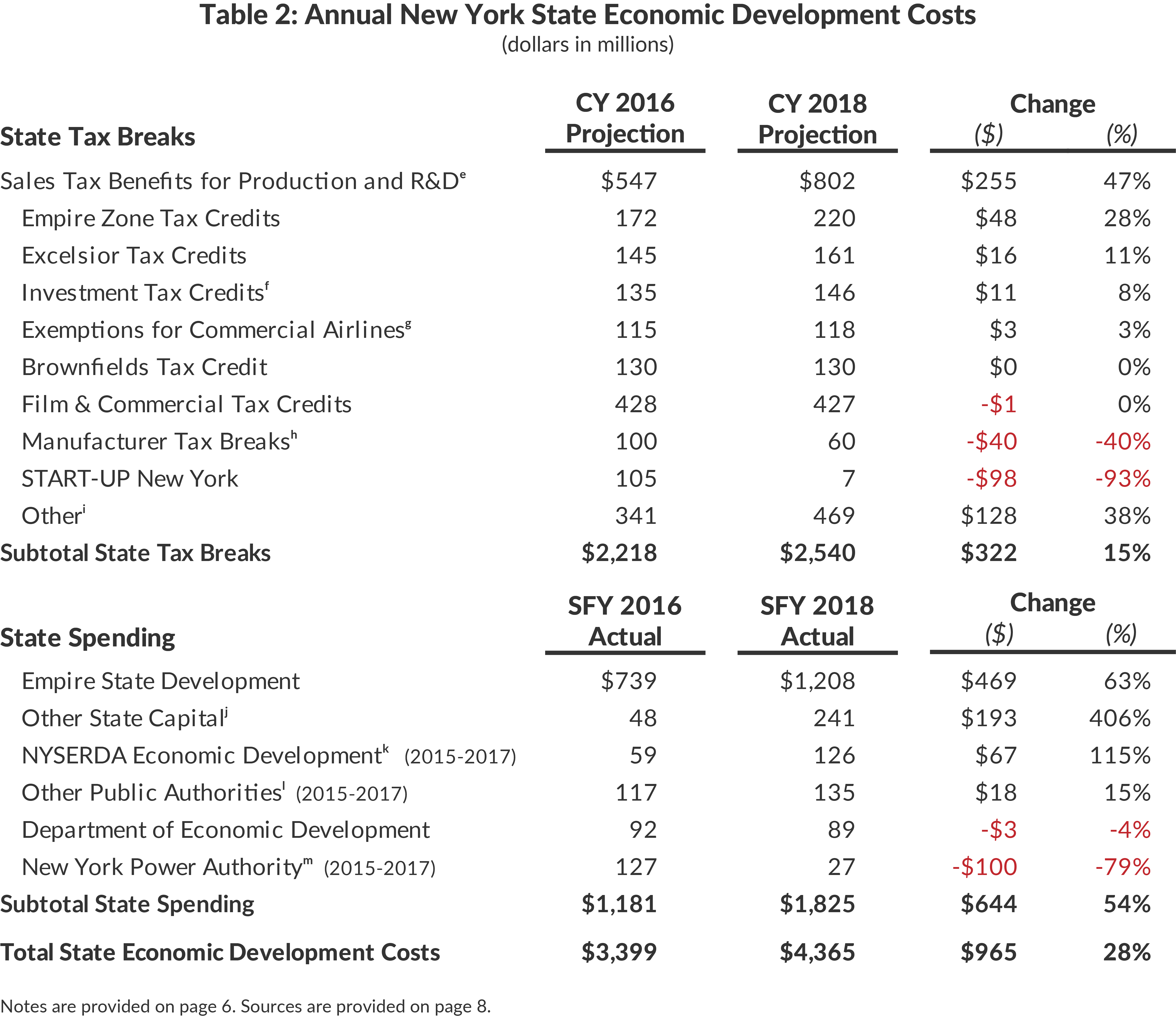 Though doubling the toll on the new bridge would represent a significant change for those that cross it, this higher toll compares favorably to the nearest alternative crossing, the George Washington Bridge, which is approximately a half hour south of the Cuomo Bridge. The George Washington Bridge, which is owned and operated by the Port Authority, assesses a toll between $10.50 and $15 for cars, depending on the time of day and form of payment. The Cuomo Bridge with its toll increase would still represent a savings, between 28 percent and 34 percent for E-ZPass commuters, and 25 percent and 32 percent for those paying without E-ZPass compared to the George Washington Bridge.15 Studies show that demand for the use of the Tappan Zee crossing is inelastic; the projected toll increase would not decrease usage significantly.16

Increasing Tolls on the Thruway System

This systemwide toll increase is both inequitable and unlikely. Though an across-the-board increase of Thruway tolls to pay for the bridge would stretch the connection between users of the bridge paying for its construction, operation, and maintenance, it would still represent Thruway tolls supporting Thruway infrastructure. Current tolls, on the old bridge, represent a significant share of the revenue generated by the entire system: nearly one-fifth of all Thruway revenues are generated by the Tappan Zee Bridge.19 The State Budget Director recently stated: “Tolls on the bridge will cover all of the remaining costs of its construction.”20What remains unsaid, and is perhaps unknown, is the extent to which the new Cuomo Bridge will support the rest of the Thruway.

Increasing the toll on the new Cuomo Bridge alone is the appropriate approach, and the new toll should cover all of the bridge’s debt and maintenance costs. The announced systemwide toll freeze runs through 2020, preventing the toll increase from coinciding with the functional completion of the bridge in 2018, when debt service will begin to be paid. Instead of allowing drivers to use the new bridge for three years before facing a toll increase, the freeze should be reconsidered and the Thruway Authority should increase tolls by the rate necessary to service the debt when the costs are payable. Even if the toll doubles, the Cuomo Bridge still represents a significant value relative to its alternative crossing, the George Washington Bridge.There should also be transparency and public discussion on the toll increase now, as the bridge is opened for use. The best approach would be to effectuate a toll increase that covers all of the increased debt service costs, when the asset begins serving users with the completion of the bridge.
By Patrick Orecki and Jamison Dague