WPCNR COUNTY CLARION-LEDGER. From the Westchester County Board of Legislators Democratic Caucus. September 25, 2017:

Last month, the Board of Legislators passed the Immigrant Protection Act (IPA), a bill which will instruct the County to not use any of its precious resources to assist the federal government in an immigration crackdown from Washington.

This bill does not instruct the County to inhibit or disobey any orders from immigration officials.  44% of Latinos, including U.S. citizens, reported that they are less likely to contact police officers if they have been the victim of a crime because of potential immigrant consequences.

Local municipalities all across Westchester are passing resolutions in support of this policy.

After the IPA’s bi-partisan passage, County Executive Rob Astorino vetoed the measure. Legislators will hold a vote to override the veto of a bill aimed to create a policy of public safety for all in Westchester. 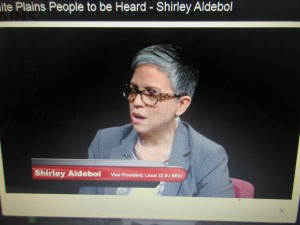 (Editor’s Note: To hear why the Service Employees International Union, the largest union membership of immigrants affected by immigration issues, is encouraging legislators to override the veto, listen to Shirley Adelbol, Vice President of SEIU 32BJ, on White Plains Television’s SPECIAL TELECAST OF PEOPLE TO BE HEARD,  at www.wpcommunitymedia.org. You can see the interview now at that web address, simply scroll down to White Plains Week-People to Be Heard to locate the program.)