↓
Home Menu ↓
Home→“NO EXPANSION OF AIRPORT PLANNED” CONSULTANT SAYS. 200 DON’T BELIEVE HIM. THEY TURN OUT TO BLAST COUNTY AIRPORT “FINAL MASTER PLAN” “A FRAUD,” ACCUSE COUNTY OF TRYING TO SLIP MAJOR EXPANSION AND PRIVATIZATION BY THEM WITH NO PUBLIC INPUT. 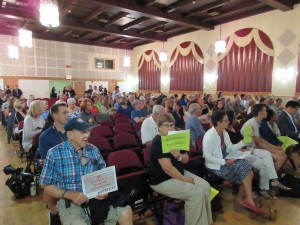 A TOUGH, SNARLING CROWD AT “THE LITTLE THEATER” AT THE COUNTY CENTER THURSDAY NIGHT AWAITED THE START OF THE HEARING ON THE MASTER PLAN FOR THE WESTCHESTER COUNTY AIRPORT. THEY DID NOT LIKE IT.

“Fraud!” they shouted more than once.

“A threat to health, our drinking water, and children”

Angry words came from speaker after speaker in commenting on the Final Westchester County Master Plan five years in the preparation that was summarized for the first half hour of the hearing. 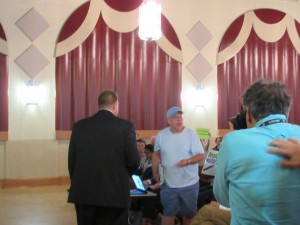 The summarization was cut short after one audience member said, “Do we have to listen to this?” and got into an unauthorized discussion with the Westchester County Transportation Commissioner  Vincent Kopicki (back to camera in above photo.The Commissioner calmed down the situation and the representative presenting the details hopscotched his copy and quickly summed it up. Then the fireworks began. 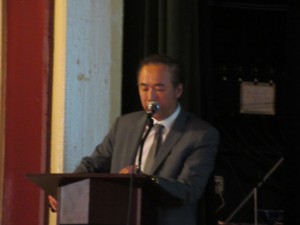 The Plan was introduced by the President of the firm preparing the plan, and he said the Plan does not call for any expansion of flights or expansion of the airport. The plan was summarized in this chart: 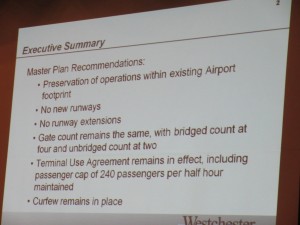 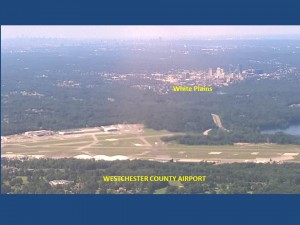 Speaker after speaker alleged the preparers used erroneous air traffic numbers, and obfuscated what the plan could allow for expansion of activity, while saying they are not expanding the curfew or amount of the air traffic.

Speaker after speaker pointed that shrinking runway 29/11 width, expanding taxiways, adding two parking garages and new commercial  hangars for corporate aircraft would create massive expansion of activity within the confines of the present airport footprint which many speakers said would despite what the plan says,greatly increase pollution and air traffic.

Within an hour of mocking, disdainful comments not one speaker supported the plan. A recurring complaint was the county never asked the community for their views on the future of the airport while the consultant prepared it. It is now up to the County legislators to approve or reject the plan, or require revisions. 29/11

The plan was prepared as a formality County Executive Robert P. Astorino said, according to one speaker, as required by the FAA, that would just lie on a shelf.