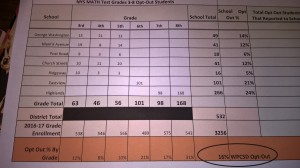 The White Plains City School District reported today that 16% of students taking the New York State 3 to 8 Grade Math Assessment Tests did not take the test, 532 of 3,256.

The majority of so-called “Opt-Outs” were in the

The pattern of heavy opting-out in the 6, 7th and 8th grades echoed the trend in the ELA Assessments two weeks ago.

A total of 520 of 3,256 Students in Grades 3 to 8 in the White Plains City Schools “opted-out” of the New York State English Language Assessment Tests—also 16%.

Michele Schoenfeld, Clerk to the Board of Education said two weeks ago, commenting on the ELA opt-out increase, said the increase was attributed to a large group of 8th grade students deciding among themselves “to convince their parents to let them opt-out of the test.”

A total of  205 Eighth graders of 542 in the 8th grade at the Highlands Middle School (38% considerably more than the 168 who skipped the Math Assessments) opted out of ELA testomg according to district statistics.

In 7th Grade, 91 of 575 students in Highlands “opted out” of the ELA (16%) (7 more—98 avoided the Math Test).  (Highlands teaches all 7th and 8th graders in White Plains, while Eastview School instructs all 6th graders.

In the 6th Grade at Eastview School, known as the “Prepartory Academy,” that transitions 6th graders to the Middle School routine in 7th grade, 79 of 489 6th graders opted out of the ELA ASSESSMENT (16%), while 22 more (101) stayed out of the Math Assessment last week.

Between the 7th and 8th grades, the critical preparation time for getting into the academic rigor of high school, 296 of 1,117 8th graders taking the ELA TEST opted out–a total of 26.5%.

In the elementary schools ELA tests two weeks ago, 3rd to fifth, the opt out rate was 9% in grades 3 to 5.