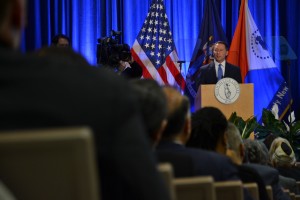 In his 2017 State of the County Address, Westchester County Executive Robert P. Astorino on Thursday highlighted how Westchester is strong and growing stronger with safer streets, more people working, a greener environment and active economic development — all while keeping property taxes flat.

During the one hour-long address before a packed room at the County Court House in White Plains, the County Executive detailed progress on a number of fronts – notably Playland Amusement Park, a $1.2 billion science and technology hub in Mount Pleasant and unlocking $140 million in revenues at Westchester County Airport through a public-private partnership (Editor’s Note: now under review by the Board of Legislators.)

Since coming into office in 2010, Astorino has lowered or held the county tax levy flat, allowing taxpayers to keep $400 million in their own pockets. The County Executive pledged to send the Board of Legislators a balanced budget in the fall that once again will not raise the county tax levy.

“I was elected to stop the tax madness, and we did just that by stopping the out-of-control spending,” said Astorino. “The county budget today is less than the budget was when we took office in 2010, which is unheard of.  Taxes are still too high, but citizens and businesses know they can count on me to manage their tax dollars smartly and responsibly. And by the way, county government is running just fine on our $1.8 billion annual budget.  Essential services are preserved and strengthened, our economy is growing, our credit rating is the highest for any county in the state, and our reserves remain strong.”

Despite those strengths and assets, Westchester County must confront its vulnerabilities, Astorino said. After sharing a personal story of family who lost their 22-year-old daughter to heroin, the County Executive announced new plans to attack the growing crisis of opioid addiction that builds on the success of Westchester’s Safer Communities initiative, which tackles tough societal issues like school safety in an age of terrorism and youth suicide by mobilizing and coordinating community resources and expertise.

Dr. Mark Herceg, Westchester County’s Commissioner of Mental Health, will lead the effort. Classes will be taught at central locations, such as the County Center, and teams will bring the program to schools and community centers.

“There is no illusion that this program will be a panacea,” said Astorino. “The work ahead will be tough, because the enemy is strong. But we go forward; confident we can and will make a difference. Because in the words of Teddy Roosevelt the worst thing you can do is nothing. That won’t happen in Westchester. We will continue to fight. Opioid addiction can be stopped, if we are all willing to take action against it, and we are.”

Astorino acknowledged the frustration and partisan divides dominating the public discourse across the country and spoke of the importance of listening to a public with opposing viewpoints and working with lawmakers and stakeholders in a balanced, persistent and bi-partisan manner.  He cited his popular Ask Astorino Town Halls as productive ways of communicating directly with the public.

“As the County Executive for close to one million people, it’s my job to find middle ground – balance what divides us – and that’s why I have been committed to bringing county government to the people of Westchester and listening to what is on their minds,” Astorino said. “Good government doesn’t come quickly. Our system of checks and balances invites setbacks … No single individual, group or party has a monopoly on the best ideas and the right way to run things. Westchester works best when we approach it as a team sport.”

Astorino noted gains made in private sector employment — nearly 44,000 new jobs since 2010 and a drop in the unemployment rate to 4.2 percent – while touting a number of other positive developments that make Westchester a desirable place to live and work, such as a 25 percent drop in crime; Westchester’s highly educated workforce; the county’s placement among the healthiest places in the country; its ranking as one of the top digital counties in the U.S., and a number of environmental initiatives, among other accomplishments.

During the speech, he also cited success in the County’s battle against homelessness – including Westchester’s Patriot Housing program that helped secure housing for over 500 previously homeless veterans – and, in a video, highlighted people who directly benefit from some of the County’s programs and services.

Astorino and the Board of Legislators worked together to shepherd a proposed $1.2 billion Westchester Bio-Science and Technology Center.

Earlier this month, the county board approved a lease with Fareri Associates on 60-acres of county owned property at the Grasslands campus in Mount Pleasant that is poised to position Westchester as one of the world’s great innovation hubs – right alongside Cambridge, Mass., the Research Triangle in North Carolina, and Silicon Valley.

When finished, the new center will feature more than two million square feet of biotechnology and research facilities, alongside space for medical offices, shopping, a hotel and a Children’s Living Science Center.

It’s adjacent to highways, close to mass transit, has access to the most educated workforce in the nation and is near world-class medical and pharmaceutical institutions like Westchester Medical Center, New York Medical College and Regeneron.

“As they say in real estate, it is all about location, location, location and the North 60 property on the Grassland’s reservation couldn’t be more ideally situated,” Astorino said. “This is a once-in-a-generation, game changing initiative. It doesn’t get any bigger or better than that.”

The County has the opportunity, under a Federal Aviation Administration program, to unlock revenues from Westchester airport to help pay for general services like police, parks, roads and day care. Westchester County is now seeking to enter into a public-private partnership as part of the FAA program.

Bids are due back in 90 days, and the concept has bi-partisan support from the Board of Legislators. The beauty of this plan is that it is expected to generate revenues of around $140 million for the County while not expanding the airport’s footprint or increasing the number of passengers.

“The idea is to create a long-term revenue stream so that money is coming into the County’s budget for decades to come,” Astorino said. “This will provide important relief to the ever increasing cost of government.”

In March, Westchester County won a decisive victory in New York State Supreme Court that allows the County and its partner, Standard Amusements, to invest $60 million into the world-famous park. The result will be new rides, new restaurants and new attractions in 2018. “The kids get more exciting rides and taxpayers get a break,” Astorino said. “Smiles all around.”

The County Executive asked the Board of Legislators to join him in a lawsuit aimed at protecting taxpayers, ratepayers, students and communities directly affected by the eventual closure of Indian Point.

The lawsuit charges that the Governor failed to follow the State Environmental Quality Review Act, or SEQRA, before announcing plans to close Indian Point.

Westchester’s proposed lawsuit has nothing to do with the debate over nuclear energy, Astorino said. Its purpose is to ensure that any decision to close Indian Point fully protects the rights and safety of residents and environment by following the law.

“How is it that nuclear reactors at Indian Point can close and leave behind their spent fuel rods in a radioactive waste cemetery for a period of somewhere between 60 years and forever without requiring an environmental review?” said Astorino. “That’s the question our lawsuit demands be answered.”

Westchester County exceeded the requirements of the 2009 federal housing settlement to develop 750 units of affordable housing in 31 mostly white communities by December 31, 2016 by delivering 790 units with another 100 in the pipeline.

“Our success surprised a lot of people. None more than the bureaucrats in their far away desks in Washington,” Astorino said. “They saw our communities as the problem, when in fact they were the solution. HUD wanted confrontation and litigation. We got the desired results with cooperation and collaboration.” 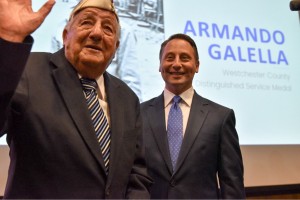 It is a county tradition to honor those who have served our nation. The County Executive presented Armando “Chick” Galella of Sleepy Hollow with Westchester’s highest honor – the Distinguished Service Award. Galella is one of the few living veterans to have fought at Pearl Harbor. He also was awarded the Bronze Star for his Meritorious Service during the invasion of Okinawa.

“His modesty is part of who he is,” Astorino said. “But it can’t mask the truth that he is a hero and an example to all of us.”