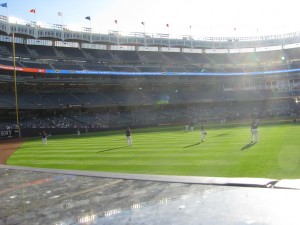 Baseball, the greatest sport, does not know what it has.

The sport consistently just does stupid things that hurt the timeless appeal of the game.

Let’s put rule changes aside for a moment.

Today the Bronx Baby Bombers open the season in Tampa Bay, Florida, which has an indoor stadium without a retractable roof, and they are playing a day game. That in itself is absurd. It should be played at night to maximize the audience in Tampa and up here in The Big Apple.

But, nooooooooooooo they are playing it in the afternoon. I have news for baseball: most fans will not stay inside today to watch an afternoon game on a beautiful spring day.

But, wait, there’s more stupidity about schedule the Yankees Youth Corps in Tampa.

Tomorrow the Yankees have an off-day in Tampa. Are you kidding me? The baseball scheduling tradition of scheduling an off-day after an opening day game is to allow teams if they are rained out on the official opening day to pay the opener next day on an open date, keeping the big gate the opener provides.

(Not withstanding that they usually will not postpone any Opening Day before the crowd arrives, and they milk the crowd for concessions while the die-hard fans are drinking concessions, eating hot dogs, pizzas, ice cream waiting for a decision on whether the game will be called.)

Now this is not fake news.

However, I think some rejects from the Trump Presidency were given jobs in the baseball scheduling office who know nothing ABOUT baseball.

Someone in the major league baseball scheduling office did not know that the Tampa Bay Rays stadium, Tropicana Field has a roof on it.

Let me repeat that, Major League Baseball geniuses: Tampa Bay Field has a roof on it!

Let’s have a Rules Committee meeting on this, geniuses: Can you figure out what this means?

The Yankee Tampa Bay game since it is being played indoors  has a roof on it.

This means the game cannot be rained out.

If a stadium has a roof, it cannot be rained out, which means the Yankees and Rays do NOT need an open date tomorrow in case of a possible rainout, BECAUSE rain cannot interfere with the game when it is played under a roof, people!

Is this  scheduling an open date Monday just being done out of tradition?

Or is it being done to avoid cutting into the New York television audience for the boring Final Four game Monday evening? Come on.

This is nuts not scheduling the Yanks and Tampa Bay tomorrow night.

Now to the automatic intentional walk without throwing 4 pitches change.

In The Times this morning  Ichiro Suzuki  the all-time great mentioned another reason why taking away the 4 live pitches in providing an intentional walk takes something away from the game.

Ichiro says he used the time during those 4 pitches in an intentional walk before him, to review the game situation, think what he wants to do or strategize at the plate against either a relief pitcher to face him, or the pitcher he will face, or thinking possibilities. He described the 4-pitches as a time out to access for the on-deck hitter. He is so right.

Conversely, (puffing on a White Owl Wallop) the automatic intentional walk  without having to throw four pitches is an advantage to the pitcher who does not have to concentrate on throwing four wide pitches without throwing one wild over the catcher’s head, and it does not break the pitcher’s control rhythm.

Shoot. This loss of the tradition of respect the 4-pitch intentional walk accorded the Musials, the Mantles, the Williamses, the Ruths (Babe Ruth received the most intentional walks of any hitter in baseball history) takes away “lore,” the mystique that only baseball has because it is such a situational game. How things happened in baseball’s history are remembered precisely because of the detail, the precision and the pitch by pitch record of box scores and play by plays of its past.

Now before baseball adopts shorter counts by going to 3 balls for a walk and 2 strikes and you’re out in the future, another dubious suggestion, then you force batters to swing on the 2nd pitch and the logic goes that with only 2 strikes you would have more hitting, more action.

No. You won’t. You will have longer games.

To combat a 3 ball, 2 strike rule, hitters–the great ones–will practice their ability to foul off more pitches. You will have more walks. More baserunners. Pitchers will tire faster in the games and the games will become longer. No lead will be safe. Starting pitchers will not last 5 innings. So they better put that one on the shelf. You will also see more brushback pitches right at the head to prevent toeholds by the hitters ready to go up there and whale the first pitch.

If the pitchers have a union, they have to fight this. Having only 5 pitches to tinker with a hitter, limits your strategy to get him out. It also eliminates the drama of the full count, or the advantage of the waste pitch on a 2-2 count.The more you work on a hitter, the more chance you can fool him. Limiting the experimentation time hurts.

No one loves a game more than the 23-22 donnybrook the Phillies and the Cubs played many years ago, I think in 1963. (The wind was blowing out at Wrigley Field.)

But, if every game is just pinball hitting, your concession sales will go down! It takes time to serve that exquisite boiled hotdog with mustard smeared on it in the aisles. It takes time to move that Ballantine Beer down the row to a fan. And it takes time to drink it. It’s really difficult drinking beer and eating a dog at a hockey and basketball and football game.

Baseball marries the American pastimes, talking about sports, second-guessing, eating and drinking while watching the game, and spending money on it, let alone keeping score on your scorecard The business men who run the game should note that–instead of trying to speed up the game.

You’re paying $20 for the cheapest seat in Yankee Stadium, you want that game to last. You pray for extra innings. At least I always did.

Baseball wants to be like the meaningless first three quarters of any NBA game?