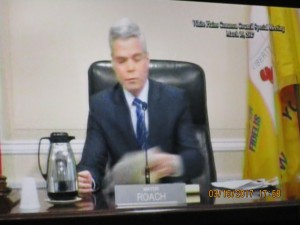 The Democratic City Committee, meeting last night at the YWCA, nominated Mayor Tom Roach by acclamation of city Democratic District Leaders to run for a second full term as Mayor in November.

Councilwoman Milagros Lecuona who is challenging Mayor Roach for the nomination, vowed in a press release issued Thursday evening state she would continue her campaign against Roach and take the nomination to a primary contest in September.

Asked why Ms. Lecuona took her interest in the nomination to the District Meeting without withdrawing before last night, Lecuona told WPCNR “I wanted to keep the District Leaders in the process as long as possible,” because she was concerned that the long process of just a few leaders selecting their favorites had to change.

Asked if the Committee had presented any candidates for the Common Council seats up this fall, Ms. Lecuona told WPCNR there were 12 candidates seeking the position, who are presenting their credentials to the Democratic City Committee Nominating Committee.

John Martin and James Kirkpatrick are incumbent Councilpersons whose seats are up for election in November, and Council, while Beth Smayda, who occupies the third seat up for election has announced she will not run for reelection for another term.

Martin and Kirkpatrick would be expected to be renominated to run, but in the past, the City Democratic Committee has denied nominations to incumbent Councilpersons who have not voted the way the leadership of the Democratic Party would have liked. The Nominating Committee refused to renominate Bill King in 2003, Arnold Bernstein in 2007, and Glen Hockley in 2009.(Democratic Councilmen Arnold Bernstein and Glen Hockley were both denied renomination)

Lecuona said her sense was the Nominating Committee would settle on its council candidates in 2 to 3 weeks.