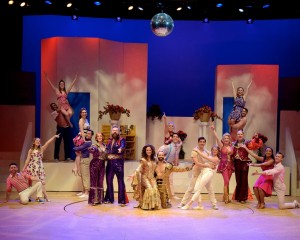 200TH WBT PRODUCTION PULLS OUT THE SUPER TROUPERS! FIRES UP THE DISCO ROUND FOR MEGAHIT MAMA MIA! FIRST PRODUCTION OF HIT SHOW IN TRISTATE REGION. 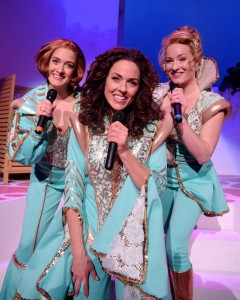 Jennifer Swiderski as Rosie (left), Michelle Dawson as Donna Sheridan and Elise Kinnon as Tanya. reuniting as their trio once more. Ms. Swiderski does another great number with Brent Bateman, singing Take A Chance on Me, clowning with him in a most amusing sequence. 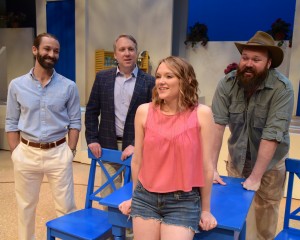 MICHELLE DAWSON  SINGLE MOM  TRYING TO FORGET BRINGS DOWN HOUSE ON THE WINNER TAKES IT ALL! INGENUE MARIAH MacFARLANE PITCH-PERFORMANCE PERFECT AS DAUGHTER SEARCHING FOR HER DAD IN FIRST REGIONAL ‘MM” PRODUCTION.

Remember how  “anthems” of ABBA, the Swedish pop group of 70S-80s Swingin? With their driving vibrance and intoxicating, swaying seductive beats and so-true-to-feeling lyrics that moved you into The Hustle and loving the nightlife,and brought back elegance and drama to going out?

Westchester Broadway Theatre has produced its 200th production and easily its most spectacular. WBT is bringing back ABBA’s magic brought to life in the 8th longest running musical of all time MAMA MIA!, thanks to the hardest-working, best costumed, engaging cast we’ve seen in 16 years of reviewing WBT productions.

Mama Mia! weaves 18 of the top ABBA songs together into a surprising dramatic story about a daughter about to be married, trying to find out who her father was.

Maria MacFarlane plays the daughter Sophie to her mom, Michelle Dawson as Donna Sheridan. Sophie discovers her mother’s diary. In it, the mother wrote of three affairs with three different men about 20 years ago, just when Sophie was born. Sophie shocked invites the three men to her wedding on a Greek Isle where Ms. Dawson as Donna Sheridan has made a hotel a success.

The fun starts when Sophie’s girlfriends arrive, and then the men arrive. Highlights of the first act feature Sophie meeting and trying to figure out which of the three men is her father. Xander Chauncy as Sam Carmichael immediately senses he is her father, while Brent Bateman as Bill Austin, the Australian, and Kilty Reidy the banker, each deliver the befuddled regrets and concerns about their misspent time with Ms. Dawson 20 years ago.

Mom’s  girlfriends from her band of 20 years ago, played with zany swagger and savvy by vampy, beach boy aficionadoette, Elise Kinnon as Tanya, Jennifer Swiderski as Rosie, team with Ms. Dawson for a evocative Dancing Queen in Act One. While the intrepid ensemble of beach boy “help” is appreciated in a splendid and saucy routine with Ms. Kinnon as Tanya wowing the house with her tearing-off-the shirt off Connor Wince  as Pepper.

As Act One closes it seems as if Ms. Dawson as mom Donna just does not have the feelings for Sam Carmichael as she fights the highly believable, earnest Xander Chauncy’s  attempts to woo Ms. Dawson back are ripped with heartache. 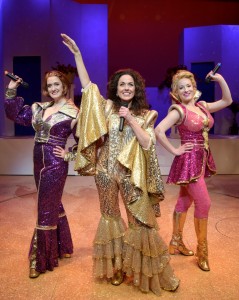 In Act Two, the Mama Mia! turns on the color. Incredible costuming brings back the memories of when women looked great going out on the floor. Sequins galore, all you old hipsters!   The sets (by Steve Loftus) actually look like a Grecian Isle beach. The shimmer of the ocean on the scrim suggests the appeal of the past as well as its rapturous regrets.

Music! You got it.

Another word, on the rapport between Ms. Dawson and Mariah MacFarlane as mother and daughter. Their duet together in Act Two, Slipping Through My Fingers is splendid as the two strong women’s voices entwine and conflict in the emotion of mother watching her daughter grow away, making her own decisions, and daughter Ms. MacFarlane realizing what her mother has sacrificed to raise her. This duet leads into the song of the show, Winner Takes It All and touches raw memorable emotions all Mothers and Daughters can relate with.

Michelle Dawson after MacFarlane leaves the stage slides seamlessly into a dynamite stop the show Winner Takes It All, her strong contralto just killing the house! The audience on opening night  burst into  spontaneous roars, stopping the show when she just lays it on Mr. Chauncy’s Sam Carmichael her former lover with this shattering lyric—Look and wait for this one.

Rarely have I heard bravos and calls of admiration from a WBT audience like the one Ms. Dawson received after finishing this emotional woman’s song about the man who got away with this lyric:

It is the show stopper song.  But wait there’s much more: the songs you love to move your body to:

GIMME! GIMME! GIMME!, STORM TROUPER (just to get me through the rest of the day), TAKE A CHANCE ON ME, LAY YOUR LOVE ON ME and the very funny I DO, I DO,I DO,I DO, I D0. That’s a marriage acceptance. The end of the second Act wraps it up with the strangest wedding you’ll see – a happy ending, even when all seems black.

But, wait you have to stay for the encore where the whole ensemble reprises a handful of the songs they’ve already sung.