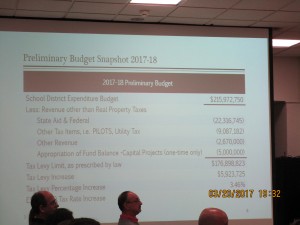 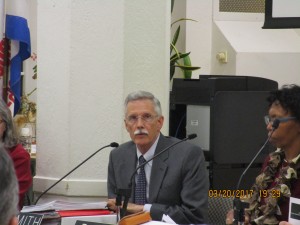 Dr. Howard Smith, Acting Superintendent of White Plains Schools, presented the Superintendent’s Preliminary School Budget Monday evening and with more school aid possible the budget as it stands is at $215,972,750 an increase of $7,222,750, 3.5% over the current year budget of $208,750,000.

The actual levy goes up 3.46 %, because of the increased tax revenue from two Payments in Lieu of Taxes properties (Bank Street Commons and 1133 Westchester Avenue) returning to the tax roll.

The amount of new taxes those two properties will pay in new and expected increased taxes in 2017-18 has yet to be calculated by the city finance office.

A total of $5 Million of the increase is provided by the increased White Plains Assessment Roll which went up 1.7% from $277 Million to $281.6 Million, the $4,730,371 increase is the largest increase in the city assessment role in 19 years.

The Superintendent said the $5 Million increase which he described as fund balance would be used to address a series of construction projects. Asked why the $5 Million wouldn’t be used to hire as many as 50 teachers, Mr. Smith said the same amount of revenue might not be available next year to fund all the teachers that could be hired.

However, a PILOT is a payment in lieu of taxes, so the property that receives a PILOT, actually pays less during the course of the PILOT in proportion if it were a completed project.

Therefore, the assumption on the new tax bill on these two properties still needs to be calculated by the city.  WPCNR  would think it presumably go up in tax year 2017-18, and unless the city gives the properties a tremendous tax break by calculating a value less than the PILOT, one might expect the revenue from these properties would be up considerably, since they are now fully functional.

Unlike school aid ( which has to be spent for a specific purpose) this approximately $5 Million in new money could have been used to lower school taxes in a one time year; pay for projects as they have chosen to do; or deposited in the capital reserve fund established last April by the district; or used to supplement any decrease in school aid in coming years.

Whatever the district gets in school aid for next year might increase the budget. Last year the district received $2.2 Million additional school aid from the state budget, the most increase in a single year in 25 years. The district budgets at this preliminary stage, $22.5 Million  in State funds and $50,000 in Federal Aid.

It should be noted that the $5 Million in increased Capital spending is allowed because if revenues go up from sources not from increased taxes, they do not count against the tax cap, according to Timothy Connors. Connors just completed his 5 week stint as Interim Superintendent as Dr. Smith returned to the district last night.

According to Frank Steffanelli, Buildings and Grounds Administrator, $3 to $4 Million of the $5 Million will fund  reroofing the second half of the White Plains High School , installing an intercom and clock system  at the high school and renovation of the auditorium rear wall, and The Church Street School roof.

The budget includes the potential cost of the first year of a new teachers contract which expires in June. Dr. Smith said negotiations had not begun yet on a new contract, and the head of the Teachers Union, Kelly Broderick told WPCNR the union and the district are in the process of  establishing preliminary meetings.

The district is hiring 21 new teachers and 4 new Teacher Assistants.

Elementary school recess programs are being changed to improve the recess experience.

A Bowling Team will be added to the sports choices.

In the general meeting after the budget presentation, John LaPlaca, Managing Partner of Altraris Emergency Management Group explained how his firm will evalutate security procedures, security equipment, and district personnel preparedness for possible emergencies in all district buildings.

The procedure will cost $50,000 through BOCES, and the district will be reimbursed $10,000 from the State of New York for using the program, Frank Stefanelli told WPCNR. New York State Stefanelli said now requires all districts to file a security plan for all their facilities. Those security plans have to be approved by the state.