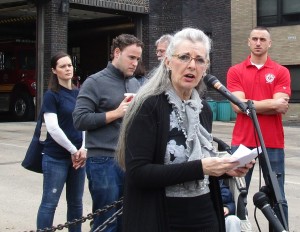 In a news conference this morning at Fire Headquarters on Mamaroneck Avenue, Councilwoman Milagros Lecuona  candidate for Mayor, and firefighters in attendance said the city has agreed to hire 12 new firefighters bringing the department up to full strength.

A fireman present at the event, confirmed to WPCNR the new firefighters will soon be sworn in, and would be on staff by March 10 and attending fire training after that date. Lecuona said she learned about the hires at the last Council work session. Ms Lecuona in her announcement  she  was going to primary Mayor Tom Roach in January has been critical of the city for the fire department personnel shortage the fire department has been drawing attention to around the city.

Asked about the status of negotiations, the firefighter WPCNR interviewed said the negotiations with the city were still going on, that he could not comment on the salary issues or the mandatory drug, alcohol and substance abuse issue, one of the contentions under discussion. The firemen will be sworn in March 2 and come on duty for training March 10

The announcement of the additional hires is the first time the city decision, which Lecuona said in the news conference would cost the city an additional approximate 1-1/2 Million dollars,

In a handout to the press, Ms. Lecuona commented:

“The current mayor has maintained numbers of firefighters at dangerously low levels. Ladder truck 34 is almost always out of service, leaving our children at White Plains High School, Ridgeway Elementary, the YWCA, the German School, and Ridgeway Alliance without all their own neighborhood equipment.  Yet today’s synthetic building and furniture materials burst into hotter flames 5 X faster than old materials, so whole rooms or buildings can be engulfed in flames before a crucial truck arrives from another neighborhood.

Now entering his seventh year as mayor, Mr Roach has slipped raises for himself and some of his senior staff members into the budget. “Our firefighters have expressed a need for additional manpower, training and preparedness funding. What does the Mayor do? He ignores them, and gives raises to himself and his staff,” said Lecuona. “The ongoing lack of vision, process, and leadership have placed White Plains on a dangerous path.”