Reacting to anti-Semitic and anti-black graffiti scrawled along the Bronx River bike path in White Plains, County Executive Robert P. Astorino made it clear today that hate speech has no place in Westchester.

“Bigotry in any of its forms will not be tolerated in Westchester,” said Astorino, who was joined by James Castro-Blanco, the executive director of the Westchester County Human Rights Commission, and George Longworth, commissioner of the Westchester County Police, at a press conference at the scene of the vandalism just south of the Metro North train station. “This type of activity is criminal and will be prosecuted.”

On Sunday, Mayor Tom Roach of White Plains issued this statement  on the incident:

“Today anti semitic and racist graffiti was found on the county trailway in White Plains.   As a progressive and diverse community, we in White Plains stand united against this offensive act and the ignorance and hatred that spawned it.

Ironically, this outrageous act took place in county parkland near the base of Chatterton Hill where Alexander Hamilton commanded artillery during the Battle of White Plains.

The heroism and patriotism displayed that day, preserving our young nation, stands in stark juxtaposition to the cowardice and ignorance of this act which seeks to divide that nation.  We will not permit it.

Upon becoming aware of this incident, I spoke directly with the County Executive’s Office and confirmed that the graffiti was being removed.  The Westchester County Police will investigate this crime as it occurred on their property.  The White Plains Department of Public Safety has offered assistance with the investigation.  We have zero tolerance for this destructive and cowardly behavior.” 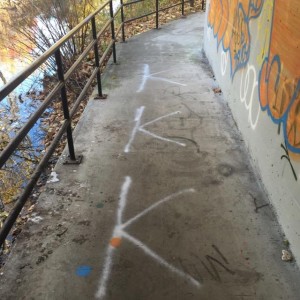 The Westchester County police received a report around 3:00 p.m. on Sunday, November 13, about the graffiti. The footpath and bridge were defaced with spray-painted scrawling, which included a swastika, the initials, KKK, and various racial slurs. Photos, Westchester County Police 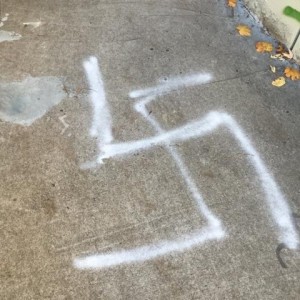 All of the graffiti is currently being removed by the county. A police investigation is underway, and Astorino has directed Commissioner Longworth to place additional resources and surveillance in all public areas owned by the county, including more inspections of county trail ways and bike paths.

With the presidential election now over, Astorino said it was important for all sides to now come together to strengthen our nation.

“That starts with respect, and as County Executive, I want everyone to know county government will remain vigilant in its efforts to ensure that the rights, dignity and safety of all our people are protected every day.”

Astorino encouraged anyone who feels they have been the victim of discrimination to contact the county’s Human Rights Commission at (914) 995-7710 or visit the website at http://humanrights.westchestergov.com/.