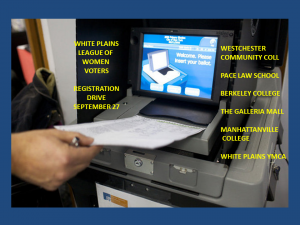 WPCNR CAMPAIGN 2016. From the League of Women Voters of White Plains. September 26, 2016:
On Tuesday September 27th, the League of Women Voters of White Plains will have nearly 50 volunteers registering new voters as we participate in National Voter Registration Day.
In an effort to get young people involved in the electoral process, the League will have volunteers at area colleges including The College of Westchester, Berkeley College, Manhattanville College and Pace Law School, plus volunteers at the White Plains Galleria Mall and the White Plains YMCA.
Voting is among the most important of American rights and it is the foundation of our democracy,  The League is proud to be part of this nationwide effort.