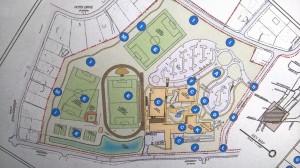 A spokesperson for the French American School of New York confirmed to WPCNR Tuesday that Judge Joan Lefkowitz of New York Supreme Court signed the Stipulation of Settlement (reached by the school with the City of White Plains September 5 when the Common Council voted 4-3 to accept the settlement).

The signed the Stipulation of Settlement September 12.

The settlement requires the city to review a revised site plan and Special Permit for a new complex of school buildings to be erected on the former Ridgeway Country Club with the entrance being shifted to Hathaway Lane.

WPCNR reckons (pending city and FASNY confirmation), that according to the settlement, the city has 14 days from September 12 to advise FASNY of any additional documents, reports, requests the city wants FASNY to include in the new revised site plan.

The 14 days, excluding holidays WPCNR assumes, would mean the city has until September 30 to determine what it needs from the school. Until I get confirmation, September 30 is just an estimate.

Rosh Hashanah takes place  Monday October 3 and 4 for the Jewish Faith, and the Columbus Day holiday takes out October 10, and Yom Kippur is observed October 12. Should the Judge take those holidays under consideration, the city may have until October  17 to get the documents in.

After the city determines the documents (earliest September 30, latest, perhaps October 17 or 24), the French American School of New York has 7 weeks to prepare and submit the new revised site plan and Special Permit Application.

This 7-week time frame would, excluding holidays, Veterans Day, and Thanksgiving, run submission of the plan into either December 2 (if the deadline for the city to submit the document requirements is indeed, September 30) or if the City is given until October 24) either just before Christmas or the first week in January when FASNY would submit the revised site plan to the city for review.