↓
Home Menu ↓
Home→Rye Lawsuit Claiming Rye Should have Final Say in How Playland is developed on Environmental grounds, Termed “Incredulous” by Key Legislators

Among other things, the City of Rye’s complaint claims that the County should not be the lead agency in certifying compliance with the State Environmental Quality Review Act (SEQRA) and that Mayor Sack and the city of Rye weren’t aware that Westchester County was conducting the necessary SEQRA analysis for the redevelopment of Playland.

The majority of the Litigation Committee meeting was conducted in executive session because the discussion took place between Legislators and the County Attorney about litigation strategy, which means it is protected as communication between an attorney and his clients and exempt from the state’s Open Meetings Law.

Matt Richter, spoksperson for the Board of Legislators said the county would respond to the City of Rye lawsuit within two weeks with either a motion for the court to dismiss the lawsuit  and a point-by-point rebuttal to the Rye complaints.

Asked by WPCNR if Standard Amusements, the organization headed by Nick Price, which is on the point of taking over Playland operation next year, has given any indication they would withdraw as a result of the Rye suit and prospects of continuing litigation, Richter said “No, they recognize this is just another hurdle that is part of the process.”  Right now, he said the county was just in the “engineering stage,” and no construction or changes were started.

Asked how Playland attendance for the summer 2016 was doing, Richter said attendance was “down,” and he would get the figures. 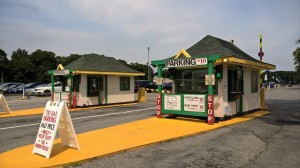 Playland Parking–$10– Plus admission to the park.

WPCNR noted today that the parking admission charge has gone up to $10 (during the week), and Richter said he would look into when that  price went into effect.

Following the meeting, Legislators expressed confidence that the County fully complied with SEQRA and sharply disagreed with Mayor Sack’s claims.

“The City of Rye’s contention that Westchester County should not be the lead agency for the SEQRA review associated with the work at Playland is not supported by arguments made in the City’s complaint nor by any precedent.”  Williams said, “Playland is a County Park on County-owned property which makes Westchester County the party responsible for the environmental review.  If the County were to cede that responsibility to the City of Rye it would establish an improper and likely deleterious precedent for all the other county park properties throughout Westchester. This precedent could greatly increase the timeline for all county renovations and repairs.”

Legislator Gordon Burrows (R) Yonkers, Bronxville is also a practicing attorney and a member of the Litigation Committee.

“The City of Rye’s claim that they were unaware of the County Planning Department’s ongoing SEQRA review and that the review did not take ‘a hard look at’ environmental impacts is, frankly, preposterous.”  Burrows said.  “Not only were the County’s activities well documented in local media, the Mayor’s office accommodated public hearings on the matter in the Rye City Council’s own chambers.  The notion that Mayor Sack could have remained ignorant to the County’s protracted review process strains credulity.  I am confident that the County will prevail in court.”