↓
Home Menu ↓
Home→WP BOARD OF EDUCATION to Vote August 29 to Continue Interim Superintendent Timothy Connors on Interim Basis When School Starts in September. 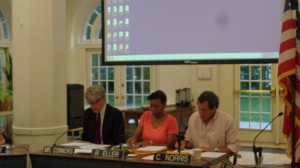 Mr. Connors was brought back on per diem as needed basis as Interim Superintendent in June when Dr. Fried could not continue his duties. There has been no announcement of the specific reason or circumstances that have affected Dr. Fried.

Thursday, Michele Schoenfeld, Clerk to the Board of Education, told WPCNR the Board will vote August 29 to hire Mr. Connors for an unspecified period until Dr. Fried is able to resume his duties.

Connors has been Interim Superintendent for approximately 2-1/2 months, on per day diem, handling the District business in Fried’s absence. He appears and comes in when the Board meets or district matters need his input and supervision.

Connors told WPCNR, after the announcement, said “I’ll tell you as soon as I get something (on the Fried situation).”