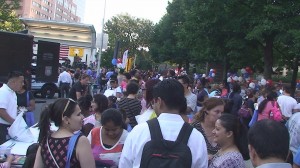 The crowd mills about the White Plains Public Safety Building at the 5th White Plains National Night Out extravaganza Tuesday night, meeting White Plains police and fire officers, inspecting police equipment, talking with officers about their jobs and getting to know White Plains finest and bravest. Photographs by Peter Katz

WPCNR PHOTOGRAPHS OF THE NIGHT. From Peter Katz. August 3, 2018:

The White Plains Department of Public Safety entertained and informed hundreds of White Plains citizens young and old of all ages Tuesday evening in front of the Public Safety Building as part of the National Night Out nationwide effort to build community ties with police and public safety personnel.

The Department of Public Safety in White Plains has no public relations problem with its citizens however because from WPCNR experience any interaction with White Plains police and fireman has always been courteous and respectful and businesslike towards citizens with rare instances or controversy. This public trust strong traditionally in White Plains was everywhere on South Lexington Avenue as children and adults alike learned about the police and fire operations, county police,and other law enforcement and support groups.

The rank and file White Plains police and firemen should be commended for their poise and respect towards citizens, which I have observed and experienced first hand over the 40 years I have lived in White Plains.

From the former late Commissioner John Dolce, to Commissioner Frank Straub to present Commissioner David Chong, that reputation and discipline of courtesy, professionalism and respect has been upheld, enhanced and demanded by the leaders of the department who consistently have set this as a number one attribute their officers should demonstrate in interaction with the community.

This is how it was last night at the White Plains Night Out in these photographs by Peter Katz: 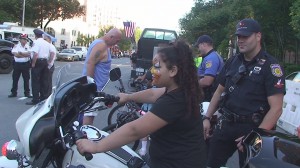 Ever want to find out what it’s like to be a motorcycle police officer? Youngsters had their chance, though no speeding tickets were handed out. 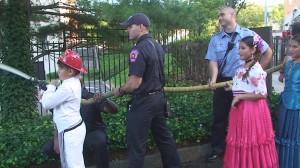 Children got hands on experience of what it’s like to fight a fire by spraying a high pressure fire hose.