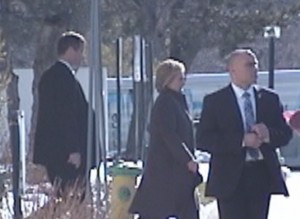 Hillary Clinton leaving this morning’s fundraiser in White Plains. The news media was denied admittance to the event, and reporters and photographers were kept far back from Mrs. Clinton’s arrival/departure location at 1133 Westchester Avenue. Details to follow later today. Photo exclusively
for WPCNR by Peter Katz.

Hillary Clinton emphasized the differences between herself and her chief rival for the Democrat Party’s Presidential nomination, Senator Bernie Sanders, during a fund raising event in White Plains on Thursday morning.

She said that his plan for free college for anyone who wants it is not realistic, and he doesn’t explain how it will be paid for. Mrs. Clinton also criticized his plan to scrap Obamacare and move everyone onto Medicare, suggesting that Sanders put forward the idea without thinking it through and understanding the financial implications of such a move.

She noted that she was very familiar with the complications involved in attempting to restructure healthcare in the U.S., having led an effort for healthcare reform while she was First Lady. Mrs. Clinton thanked those in attendance for their support, both monetary and philosophical.

She explained that her recent campaigning in Iowa has given her the opportunity for an even deeper understanding of the needs of the American people, especially the middle class which has lost ground while the extremely wealthy continue to expand their holdings.

The former First Lady, Senator, and Secretary of State addressed an enthusiastic gathering of about 500 who had paid from $250 to $2,700 per ticket for breakfast and the chance to hear her speak, and perhaps shake her hand and pose with her for a photo.

The event was staged by the group Westchester for Hillary in an office building owned by the development company RPW Group at 1133 Westchester Avenue. The building’s atrium was transformed into a venue complete with dining tables and a stage.

Reporters and photographers were not allowed inside to cover Mrs. Clinton’s speech. However, one of the attendees initiated a live video feed of her speech using a cell phone application, allowing the few journalists who were aware of the feed to monitor what she was telling the gathering.  In addition, an elected official who was attending the event subsequently shared with the news media a photo he had taken inside.

The event was scheduled to take place from 8:30 am to 10:30 am. Mrs. Clinton’s motorcade of three vehicles arrived at about 8:50 am. Instead of being directed to the circular driveway in front of the main entrance, Mrs. Clinton was taken to a rear entrance, out of sight of the television cameras which were waiting in the front.  She stayed longer than expected, not leaving until shortly before 11 am.