↓
Home Menu ↓
Home→State Senate Republican Majority Leader Calls for Reform, Will Work with Democrats Only if They Agree with Republican Policies 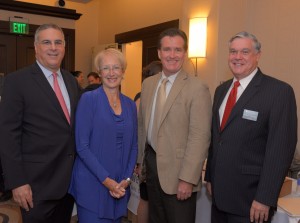 Speaking before a crowd of nearly 100 members of  The Business Council of Westchester, Senate Majority Leader John J. Flanagan on Friday called for a series of business-friendly reforms and expressed frustration with Gov. Andrew M. Cuomo’s efforts to raise the minimum wage.

Despite differences over raising the minimum wage from $9 to $15 – a 67 percent increase, he noted – Flanagan also said he and his Republican colleagues weren’t interested in mere partnership divisions: they will work with the governor and Democrats when they agree with them on policy.

“We’re going to work with him when he’s doing right by people, but we’re going to push back when he’s not,” Flanagan said of the governor. “We are here for a reason.”

“If you’re doing things at a state level and it’s not done at the federal level, it has a negative effect,” Flanagan told the room of BCW members. “We are going to get engaged in this debate (on the minimum wage increase) and it’s going to be contentious.”

During the nearly one hour discussion, which was Flanagan’s first before Westchester business leaders and included a question-and-answer period, the Senate majority leader also covered a range of topics included reforming New York’s vast regulatory system, Common Core, Tappan Zee Bridge, Metropolitan Transportation Authority, minimum wage,  and the property tax cap, among other important and challenging issues facing the state. He said creating jobs and reducing burdens on business would be a priority for his members.

“New York is still, to a degree, a death by a thousand cuts,” he said citing its regulations, burdens on business and vast bureaucracies.”

While Flanagan addressed challenges facing the state and called for more reforms, he also touted New York’s regional economies and noted how interconnected and reliant industries are on each other.

“We are one great state. We are one very big state,” Flanagan said. “Yes, we have our regional differences – and some of those differences are acute – but we are one state.”

John Ravitz, executive vice president and COO, has known Flanagan for 25 years dating back to the years they served in the New York State Assembly. Ravitz said Flanagan won’t get stuck in the “Albany bubble” and knows that he will listen to businesses and members of the public.

“We’re grateful for Majority Leader Flanagan’s insight, candor and dedication,” Ravitz said. “This is precisely the type of positive and productive dialogue that we strive to bring our members through our political speaker series.”