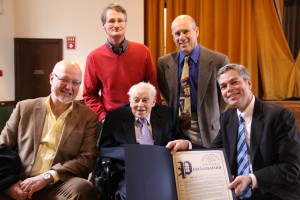 Reverend Everett C. Parker’s 100th birthday was celebrated by friends and family at the Church in the Highlands January 13th,2013. He was presented a proclamation by the Mayor of White Plains Thomas Roach (lower right) and was delighted to also have James D. Kenny, upper left Executive Director of White Plains TV, John Vorperian, upper right and Bice Wilson,lower left.

Editor’s Note: John Vorperian, producer of Beyond The Game on White Plains Television served on the White Plains Cable Television Access Commission with long White Plains resident, Reverend Everett C. Parker. Reverend Parker died last Thursday at 102 years of age and was celebrated nationally by newspaper accolades for his brave role in challenging prejudice in the television coverage of the 1960s.

A shadow was cast over our city and nation last week concerning the public’s interest in communications.

I was saddened to learn of Rev. Everett C. Parker’s recent passing.

His stellar reputation as a civil rights crusader and unabashed champion for fairness and equality in the communications field was legendary.  Some have rightfully titled him as the Father of the Media Reform Movement.

In the 1950s and 1960s, the United Church of Christ Office of Communications, which he founded, confronted powerful media outlets that failed to serve the public interest.  In a David versus Goliath setting he took on influential broadcasters that presented racially biased programming.

He contested formidable media stations that engaged in racially discriminatory employment practices. Those successful battles led to reinforcing the fact that media outlets are to serve the public interest. Or as Dr. Parker would promote “serve all the publics.”

I had the distinct pleasure of serving with Rev. Parker on the White Plains Cable Television Access Commission. The first WPCTA meeting I attended was at his home. He warmly greeted me. As just one of the myriad of community producers he also surprised me with a firm understanding of my particular cable program.

Today’s public square or village green for a speakers’ corner is access television. The ordinary resident can step before the camera be seen and heard by the community.

At that meeting and all that followed the good Reverend always raised two significant subjects to remind the commission about portions of our community that may not be heard.

How was this broadcasting “village green” being protected? But more importantly what steps were being taken to ensure all White Plains residents could get access and participate?

Reverend Parker, thank you for asking the questions to help us step back and prompt us to think and consider all our community members.

One could say in his own way he got us to look at the big picture. Rev. Parker, You will be missed.
-John Vorperian