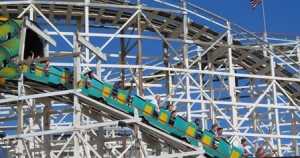 WPCNR PLAYLAND GO ROUND. From Friends of Playland website. September 16, 2015:

The 2015 Playland numbers are in, and we have the reports. Please note: These are UN-ADJUSTED numbers and will go through more detailed processing over the next month or two as they sort out concessions agreements etc.
Suffice it to say though, that ALL numbers for Beach & Pool, Parking, Mini-Golf and the Amusement Park itself are UP SIGNIFICANTLY over the 2014 season (which was up significantly over the 2013 season).
Before anyone starts chiming in that “It was the weather” remember this: the weather LAST year was almost a carbon copy of this summer, excellent, not too hot, almost no rain. If the weather was the only factor driving up attendance and revenue, it would have been on a par with last year. Same great weather, ,significant increases in attendance and revenue.
CLEARLY the added marketing budget and the reduced price admission on T-W-Th were excellent moves by the Parks Dept. to bring in more customers – AND THEY WORKED.
Imagine how much better a season the Park could have had with just a few other minor changes that would have cost nothing and brought in more revenue (opening all the foods and games concession stands rather than letting 50% of them sit shuttered and boarded up all season would have helped tremendously also).
We won’t know for sure until the final numbers have shaken out more towards the end of the year, but all signs point to it being very likely that Playland not only covered its entire operating budget for 2015….it is safe to say it very likely MADE A PROFIT.
These numbers do not denote a “failing” Park –
Parking:
2014: $767,574
2015: $969,265 (UP $201,692)
Beach & Pool:
Attendance –
2014: 57,085
2015: 74,239 (UP 17,154)
Beach & Pool Gross Revenue:
2014: $319,100
2015: $368,384 (UP $49,284)
Mini Golf:
2014: $30,567
2015: $33,375 (UP $2,808)
AMUSEMENT PARK-
Attendance:
2014: 467,948
2015: 529,985 (UP 62,037)
Amusement Park Gross Revenue:
2014: $8,782,138.50
2015: $10,055,625 (UP $1,273,486.50)
IMPORTANT NOTE: The ‘Gross Revenue’ number for the Amusement Park does not yet accurately reflect what the final number will be, and that will likely decrease somewhat. This number is not factoring in the discounted pricing on T-W-Th nights. Those revenues were, for some reason, calculated on full admission pricing all the time.
With total revenue up $1,527,270, the numbers still indicate that even with that adjustment there is a good chance the Park may have turned a profit. These numbers have not factored in revenue from various concessions.
We are also not factoring in Debt Service for the simple reason that every Park in the County Parks system carries Debt Service and the only Park that it is ever applied to when discussing the budget, numbers, profits and losses is Playland.
The Debt Service is currently around or below $2.5 million, if we are recalling correctly what was said at an LPPH meeting last Spring.
WHY are we allowing the CE (County Executive) & the BOL to hand management of this public park over to a hedge fund for private management?
CLEARLY the County CAN run this park. They could do an even better job than they did this year if the CE’s office and the BOL would give the Parks Dept. the support that they need to do their jobs. Nobody knows how to run Playland better than the people actually doing it right now. What do we need Standard Amusements for?