Four and a half years of review of the French American School of New York plan to build a regional campus on the site of the former Ridgeway Country Club ended last night in defeat for the school temporarily, at least, pending a promised lawsuit by the school to reverse the decision.

With Councilpersons Nadine Hunt-Robinson, Dennis Krolian and Milogros Lecuona voting against the closure of Hathway Lane, countering the yes votes of John Kirkpatrick, John Martin, Beth Smayda and Mayor Roach, resulting in a 4-3 in favor vote on the Hathaway Lane Closure measure  (required to proceed with the FASNY site plan, the second item before the council tonight), the council vote falling one vote short of the 5-2 super majority needed to close the street. 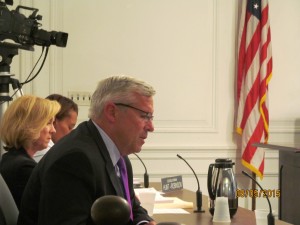 Councilperson Nadine Hunt-Robinson third from foreground, signaled she had not changed her mind. Councilperson Beth Smayda second from front and John Martin, front, both supported the closure; Martin fearing what restrictions a possible unfavorable court decision would impose on the city.

That one vote shy was provided right at the beginning of the proceedings about 5 past 7 when Councilperson Nadine Hunt-Robinson,(appointed by Mayor Roach and the Common Council to replace Benjamin Boykin in January, 2014, was elected in 2014 to complete Boykin’s term and is up for election for  a four-term this November), began her comments on the Hathaway Lane closure, the first item for voting.

There was no suspence.
Hunt-Robinson and John Martin were the only councilpersons in June to express new concerns on the Hathaway Lane closure measure. If either one stuck to their guns the closure was doomed.

Hunt-Robinson read her prepared statement praised the work of FASNY, the city consultants and staff, and the arguments made in favor of closing Hathaway, but she said she was very concerned about emergency response times that she said the Department of Public Safety had said would suffer due to road closure, and for that reason, she would vote “no” on the project, echoing her comments made June 29. Apparently all the city’s lawyers and consultants and Mayor’s men and women could not convince her otherwise (if they attempted to do so) in the last 36 days since her June 29 surprise.

Councilperson Beth Smayda said she voted in favor the environmental findings statement in December 13 and would vote yes on the Hathaway Lane closure as did long supporter of the project, Councilperson John Kirkpatrick. 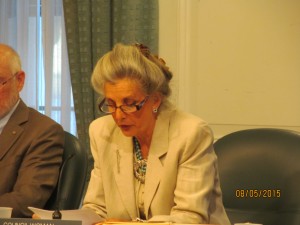 Milagros Lecuona, opposed to the project from the start due to what she described as a flawed plan, echoed that sentiment again, and said any decision had to be based on what is right for the persons in the community which she said should be any counilperson’s guiding principle. 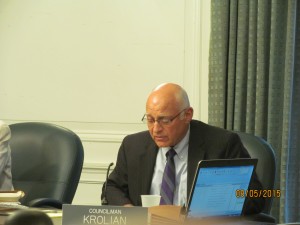 Dennis Krolian based his intention to vote no on the recent Cornell decision where a judge decided that a school could be denied if the community thought it would create unsafe conditions for the public.

Milagros Lecouna and Dennis Krolian back to back were next to speak and each reiterated their positions to vote “no” on the Hathaway Lane closure. Lecouna for safety reasons and Krolian basing his reasoning on the recent court case decision

The die was cast. There would be no approval of the FASNY campus. Council President John Martin said though he had expressed doubts on the Hathaway Lane closure, he would vote Yes because of the uncertain nature of what a court would order White Plains to allow if the court decided in favor of FASNY in any lawsuit.

The Mayor also voted “Yes” and said the Hathaway closure was defeated. He called the question on the site plan though he stated it could not proceed. The Mayor said he would “vigorously defend” the city in any possible lawsuit.

The Council then voted to table the ordinance approving the site plan.

The French American School of New York issued a statement  saying “we will immediately commence legal action in New York State, as well as possibly Federal Court, seeking an overturning of the City Council’s decision and potential millions of dollars in damages.”

Asked for comment FASNY officials referred WPCNR to their spokesperson Geof Thompson, who issued this statement:

“We are deeply disappointed and disturbed by the outcome of tonight’s vote by the White Plains Common Council. While some members of the Council understood that the plan for our school and publicly accessible Open Space Conservancy meets all environmental and legal criteria and has been fully and thoroughly vetted, others sided with a group of neighborhood opponents and rejected the plan.

This is the same group of opponents who fought the City when it sought to purchase the property for a municipal golf course and pool (Editor’s note: in fall of 2010 when the council was not the same as tonight’s group, Mr. Krolian, Mr. Kirkpatick, and Ms. Hunt-Robinson were not on that council)

We believe this decision is unsustainable on many grounds. As a result, we will immediately commence legal action in New York State, as well as possibly Federal Court, seeking an overturning of the City Council’s Decision and potential millions of dollars in damages. We are confident that we will prevail, have the right to build the school, and that the rejection of the plan was arbitrary and capricious at best.

The Council had previously voted 6-1 that all environmental findings under the State Environmental Quality Review Act (SEQRA) had been met and there is no legitimate basis to now reject the plan. It is a shame that some members of this Council have sought fit to engage this City in a needless and expensive legal battle that it will lose, and cost White Plains taxpayers significant sums of money. After nearly five years of the most intensive review given to any development plan in City history, and despite numerous revisions and compromises that we have made to address the concerns of the public and the City, the rejection of a School, a very well respected one at that, is utterly unreasonable and illegal.

We have the support of hundreds of neighborhood residents, environmental organizations and the leading business organizations in Westchester County. White Plains has a well-deserved reputation as a center for schools and education, and diversity. We remain confident that the Court will uphold our plan, and that our school will become an important part of this rich community of White Plains soon.” 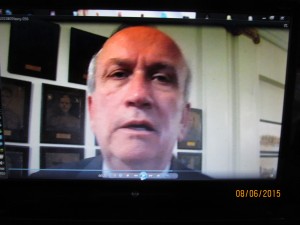 John Sheehan,(above) President of the Gedney Farms Association, commenting to WPCNR after the meeting said,

“We’re very gratified by the decision tonight, and the very eloquent comments by Councilwoman Lecuona, Hunt-Robinson and Councilman Krolian. I think it’s now time for FASNY to move on. Don’t waste an more money of their school’s resources. Find another site, an appropriate site can be found.

I fine their threats to our government to be very inappropriate in trying to force a vote in their favor.”