An overflow audience of firefighters and families looked on as Mayor Thomas Roach, Commissioner of Public Safety David Chong and Fire Chief Richard Lyman honored their men, and community partners for their outstanding efforts and assistance in the last year 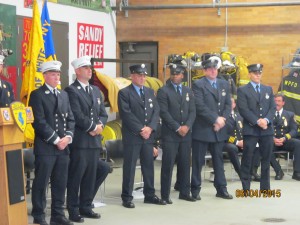 Lieutenant Eric Bratburg, Lieutenant Tom Glass, Firefighters Salvatore Birittieri, Percy Johnson, Rocco Presto and Tonin Bucaj received the Life Saving Award for coming to the aid of fellow firefighter Francis Hosei who suffered a heart attack on November 3 while fighting a fire at 90 Bryant Avenue. These men quickly began emergency cardiopulmonary resuscitation on Firefighter Hosei, who was in the audience Thursday evening (shown below) and thanked his comrades for giving him a “second go round.” 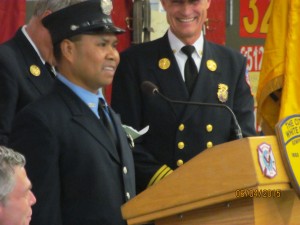 Firefighter Francis Hosei thanks his comrades for giving him a second chance by saving his life. 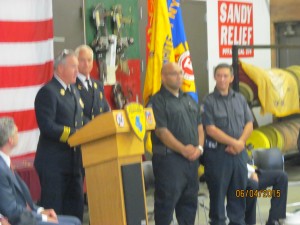 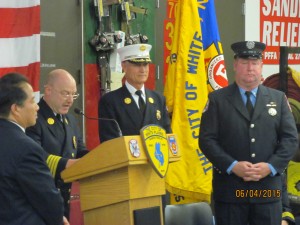 Firefighter Peter Lasher (right) was presented with the Life Saving Award for acts performed within or beyond the scope of training and duty which directly contributes to the saving of a civilian life. While on duty at the Department of Public Safety May 5, one month ago, Firefighter Lasher was told by a woman that a man had just collapsed. Lasher contacted dispatch, request an ambulance, quickly assessed the man, saw he was in cardiac arrest and began cardiopulmonary resuscitation. Lasher’s action directly contributed to restarting the man’s heart and saving his life.

Receiving Company Unit Citation Awards were Rescue 88 and Group 3 Engine 67 for their roles in rescuing two workers in a trench cave in July, 2014– 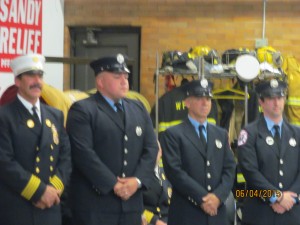 The firefighters included Lieutenant Len Bonadies, Firefighters Richard Hall, Charles Valera and Michael Niles (above) of Rescue 88 received Meritorious Service Awards in their efforts resulting in the rescue of two workers buried by a cavein in Rye.

Lieutenant Steven Glover and Firefighters Warren Fargo and Canute Hibbert of Group 3, Engine 67 were honored with Company Unit Citation Awards for their aid in the trench cavein incident.

Lieutenant David Allegretti, Firefighters Anthony Evangelista and Michael Fiorentino of Group 1 Engine 67, received Unit Citation Awards for their efforts in rappelling from a balcony into a courtyard on December 16, 2014 to treat and rescue a injured worker who had fallen 15 feet into the court.

In the well-publicized fire at the Mobil Service Station on the Hutchison River Parkway, one year ago on June 3, 2014 Lieutenant Mark Casarella, and Firefighters John Egan Sr. and Donald Wilhelm were credited with moving quickly to stablize the fire, turning off the gas pumps, extinguishing the fire and salvaging “a significant amount” of property. They were awarded Company Unit Citation Awards for their actions.

The Group of Rescue 88, Lieutenant Kevin DiSanto, Firefighters Chris Lasher, Joe Clauser andVito Fascilla were honored with Company Unit Citations for rescuing an injured boy November 11, 2014 who had fallen 20 feet off a cliff at Cranberry Lake Preserve in North White Plains. They stablized the scene, provided “technical rescue knowledge, treating and assisting in rescuing the boy.

Firefighter Charles Valera received Individual Citation as  volunteer who is contributing his services without pay to maintain and repair firemens’ breathing apparatus. 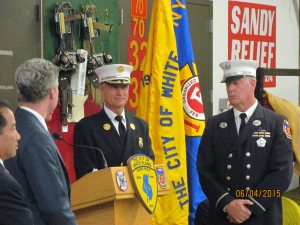 Lieutenant Kevin Lasher (right)was given the Department Excellence for his dignified work in overseeing funeral detail for fallen firefighters and assuring grave sites of deceased firefighters are properly identified and marked with the department Maltese Cross. 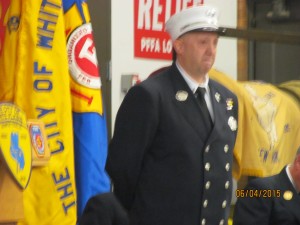 Lieutenant Adrian Scapperotti was given the Visionary Award for his innovation of training programs that “have had a direct and positive impact on the safety of department members. 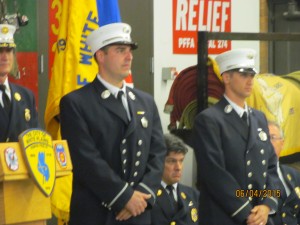 Lieutenants Louis Dominguez and Roberto Fortuna received Department Excellence Awards for their roles in supervising the training of new firefighters.

It was pointed out repeatedly by Deputy Chiefs presenting the awards that the rescues, the savings of two lives, as well as the words that that kept coming up in presentation after presentation, “stabilizing the situation” were the direct result of superior training and the know-how that clicks in in an emergency. 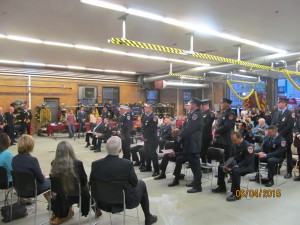 The ceremony concluded with the names of firefighters who have served more than 20 years in the department. Not all could be present because they were on duty. But the names and the years impressed you with the dedication of these men to the City and its residents.. As West Point Chaplain Fred Marasco said during the Invocation, firefighters go into action not knowing what they weill encounter and risk their lives for strangers. The evening stories of how lives were saved and people rescued drove home the debt White Plains owes these brave, dedicated men.