↓
Home Menu ↓
Home→Easing of Regs, Relaxed Zoning, Gov-Sharing Needed to Grow Westchester. Urged by Biz Leaders. 20-30 Somethings We Are Counting on You

Westchester County has many great assets and challenging obstacles for economic development, yet leaders from real estate, government and business remain optimistic about its future and ability to remain competitive.

A sell-out crowd of nearly 200 people packed the room at Tappan Hill Mansion in Tarrytown on Tuesday to hear from experts who took part in The Business Council of Westchester’s provocative panel discussion entitled Navigating Westchester: Threading the Needle for Economic Growth, where leaders said that the county is going through important shifts that will reshape its economy and landscape for generations to come. 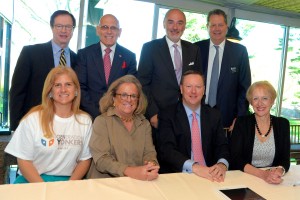 “We’re at a point where we are transforming Westchester,” said Robert Weisz, Chairman and Chief Executive Officer of RPW Group, citing the massive growth in the health care sector, the repurposing of antiquated office parks and residential communities and revitalization of many downtowns and urban centers. “Over the next 20 years, we are going to see a major transformation from what is happening today … The next 20 years are going to be critical for Westchester.”

County Executive Robert P. Astorino opened up the breakfast, which was part of The Business Council’s KeyBank Speaker Series, with an address that highlighted Westchester’s assets including its highly educated workforce, access to transportation, its excellent schools and great quality of life. But he also pointed to problems including its many layers of government, burdensome state and local regulations, and high property taxes, which drives up the cost of living.

“High taxes are the No. 1 reason people are leaving,” Astorino said, highlighting a greater need to share services, consolidate government and control spending. “Does concierge government still make sense? … We have to find the right balance.”

As part of the event, a panel made up of the region’s thought leaders and decision-makers followed the county executive. In addition to Weisz, it included Tim Jones, Partner and Managing Member of Robert Martin Company; William Mooney III, Director of Westchester’s Office of Economic Development; Marsha Gordon, President and CEO of The Business Council of Westchester; Wilson Kimball,  Commissioner of Planning & Development for the City of Yonkers; Harrison Mayor Ron Belmont and Bronxville Mayor Mary Marvin. Geoff Thompson, Managing Partner of Thompson & Bender, who has more than 30 years of personal experience with many of Westchester’s major development projects, moderated the discussion.

In addition to facing certain challenges, such as high taxes, layers of government and extensive and costly reviews that in some cases can take years, the panelists agreed that Westchester’s future relied heavily on maintaining its excellent schools and quality of life; investing in its infrastructure and transportation; providing appropriate housing for a younger workforce (the millennials or GenY); reforming state regulations such as SEQRA and outdated local zoning laws, and supporting local businesses. They also said local leaders must have the political will to make tough choices on development while promoting their own communities as good places to do business.

Wearing a GenerationYonkers T-shirt, Yonkers Planning Commissioner Kimball highlighted the city’s marketing and advertising campaign that is targeting high-tech companies, start-ups and medical facilities as well as younger workers looking for an urban environment. She said many cities such as Yonkers have great industrial spaces conducive for such companies and that Yonkers is forging ahead with thousands of apartments and housing units in its downtown and waterfront area.

“If you have the political will, things can happen,” Kimball said.

Belmont said Harrison is developing its downtown and transforming the I-287 corridor by adaptively reusing office parks – all with an eye on its long-term success.  While the downtown looks the same as it did in 1965, 1995 and 2005, Belmont said by “2025, I believe we are going to be looking different.”

Jones, of Robert Martin Company, agreed. “The future is bright,” he said. “Twenty years from now, the millennials will be moving to the suburbs … Westchester is a mature market, and it will continue to re-invent itself.”

Mooney said many of Westchester’s towns and cities have a “millennial urban feel” and Westchester has all of the cultural, social and economic amenities offered in Manhattan, Jersey City and Brooklyn — without the high real estate costs.

“Our commercial rents are half the cost of New York City and we’re less than 30 miles from mid-town,” he said. “We’re on the rise. We’re perfectly positioned to grow and thrive.”

Gordon said Westchester is great place to live, work and entertain because of its rich cultural venues, vast parklands, and diverse population. She said the forum was a great success. “We’re delighted to have brought together such an impressive and knowledgeable group of professionals,” said Gordon, President and CEO of The Business Council. “I’m optimistic that the vision for Westchester County is right and its economy will remain strong — now and for generations to come.”