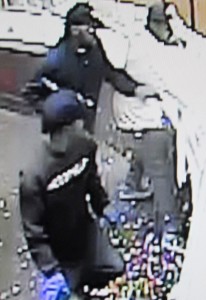 The Tourneau Robbery In Progress in The Westchester, August 18, 2014 (Tourneau Video Surveillance )

WPCNR has learned there have been 18 Federal indictments in the Detroit area as a result of high end jewelry store robberies in six different states over the last six months, including the Tourneau Store in The Westchester Mall.
Details are being assembled police say and WPCNR expects more on this story to be released Tuesday morning.
More from WPCNR as this story develops.
The indictments according to WDIV-TV Detroit,  were handed down Friday February , as detailed on the Click-on Detroit website,
http://www.clickondetroit.com/news/17-from-metro-detroit-charged-in-smashandgrab-robberies/31520426

Seventeen people from the metro Detroit area are charged in connection to a series of smash-and-grab robberies across the country.

According to the indictments, crews from the metro Detroit area carried out six robberies. They are accused of traveling across the country to jewelry stores, smashing Rolex display cases with sledge hammers and making off with hundreds of thousands of dollars worth of merchandise.

“It creates a risk of violence that’s intolerable in our community for the kind of quality of life that we want, and so we’re doing all we can to stop it. If we can’t stop them from coming in we’re going to stop them from going out and being free in the community,” said U.S. Attorney Barbara McQuade.

A reward of up to $45,000 is being offered for information leading to the arrest of other people connected to these robberies.