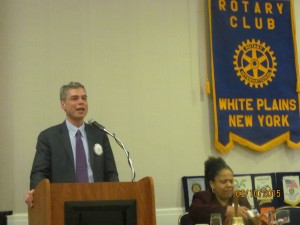 Mayor Tom Roach said White Plains was in excellent position to cater through its ongoing construction of new rental apartments to attract persons interested in the city living experience where you can walk to restaurants, amenities,entertainment. He said the city was committed to development that would turn retail toward the street and create the sidewalk ambience of the city existence

Mayor Thomas Roach of White Plains delivered a 35 minute State of the City Message to the White Plains Rotary Club this noon at the Crowne Plaza Hotel, committing the city to major changes to proposals currently  before the city into developments that attract passersby from the street, abandoning the enclosed enclave mall car friendly concept of the past.

His vision is to have retail opening to the street that will make White Plains sidewalks bustle with a new urban population who like restaurants and entertainment they can walk or bike to from their apartments and not have to rely on cars.

The Mayor began  saying that White Plains has been recognized as the third best place to live in the state, (“though I think we’re the best”) and said the city is committed through new apartment construction and street-active retail to fill the demand brought about by  “a shift over to wanting apartment living in cities. Young people want to walk, bike to restaurants, movies within walking distance of their homes. White Plains is an active part of that with residences downtown.”

He said the city’s latest development on the newly designated urban renewal area on the northside of Westchester Avenue which is just beginning, will activate the Franklin Avenue neighborhood by creating a direct pedestrian access way via sidewalk to bring them to the new retail on Westchester Avenue, allowing residents in the Eastview neighborhood to walk safely and easily past the new hotel planned there, and the 250 apartment complex planned (including 25 affordable apartments). He said the hotel would be without a ballroom or meeting spaces, appealing  to families and the development retail and restaurants would front on Westchester Avenue.

He said the city was committed to making Westchester Avenue more pedestrian friendly and crossable whether through narrowing the street, or widening the sidewalks. He added this policy would also consider other pedestrian-intimidating boulevards around the city for either narrowing or traffic redirection, any combination to make walking, biking, easier

Meanwhile at the WP Pavilion

The Mayor said the city has advised Erstadt-Biddle owners of the WP Pavilion Mall on Maple Avenue that the city prefers retail and restaurant establishments to be on the street side with wider sidewalks to invite pedestrian traffic out from the apartments in the interior and to walk down to the Crowne Plaza, and The Westchester Mall. He also proposed a pedestrian entrance into the Westchester where the  Bloomingdale Road garage entrance is now. He said he did not know if this was possible but it is a policy the city is pursuing.

On the Other Side of Town

Meanwhile on the other side of town, he said  the Grid Property parcel (on the former Sholz site) was a long way off but said, “The city is staying firm. We want townhouses with parking behind the townhouses on Maple Avenue, with open-to-the street retail on the West Post Road side.”

And on the South Side

On the French American School of New York review process, he said the storm water plan was still being developed and no resumption of council deliberations is scheduled at this time. “There is light at the end of the tunnel” he said, “but there’s no train coming.”

Parking of the Future–AP IT

On the subject of Parking and complaints about there being no place to park, Mayor Roach said the city is introducing a new Ap for smart phones that will allow users to search parking near their destination, go there, find a place and pay for parking on the phone.

The city recently signed a contract for that. The parking Roach said would be openended…and the user paying by smartphone would be able to pay for the entire fee when they returned to their car. The Mayor said there is possibility that restaurants can pay the parking through the phone as a promotion to get customers at their tables. The Mayor was very high on the convenience of “Smart Phone” parking. He did not address parking rates or ticketing policies, nor were any questions asked about parking fees or rates.

The Mayor touted the new tennis courts at Ebersole Rink as being very busy, and said it was an example of how the city is trying to “maximize the  assets we have.”

He mentioned how White Plains is now the leading place for electric chargers of electric cars in Westchester County, saying this would help to attract more residents.

Just a little touch of budget

On the state of the city budget, he said he expected the city to again be under the 2% tax cap (affecting property taxes); that the city was not bonding for certioraris, and the bond rating was still AA-1.

He ended saying the city is committed to promoting living downtown, and would use urban renewal “when we have to.”

He said his Director of Special Projects, Jill Iannetta is the city liaison who will work with entertainment and movie companies to set up shoots in the city and noted that this is a growing interest, citing the filming of scenes from “Billions” in the White Plains Library.

He said he is going to companies that already are headquartered in White Plains to see what their needs are and how the city can help. Out of this, he said has come an idea to involve most corporations to participate in a White Plains Corporate Day to promote the advantages of conducting business in White Plains.

He reported new apartment buildings will be coming on stream at Waller, Maple, DeKalb in the near future, without giving a date. No mention was made of the 55 Bank Street project or Winbrook progress on rolling out the next building in that “revitalization.”

In a brief Q & A, Nick Wolff complained about the train station conditions saying they were disgusting. The Mayor said he’d like to point out that Metro North manages the train station, not the city. He did say that the city is budgeting for a full time Taxi Master in the city budget to make the White Plains taxi rider experience more orderly and consumer oriented. The city he said is also working on new taxi regulations.

On  development of the train station, Mayor Roach said the city and state are closing to signing a contract for the $1 Million to conduct a feasibility study on what can be done in redevelopment of the station plaza which the city owns.The Mayor said he was strongly in favor of providing attractive access to the Bronx River Park (on the west side of the Metro North tracks, which currently has no access.)

When that survey contract is signed, Roach said, a community involvement process in finding out what residents, businesses, feel could or should be done there.  He did not touch on the Bus Rapid Transit situation. Nothing as far as WPCNR knows has been decided in specifics on location of Bus Rapid transit stops in a year or more.