The 8-year delayed 55 Bank Street project planned for the West side of town to be built on the White Plains commuter parking, (originally approved during the Mayor Joseph Delfino administration) will begin construction in March, apparently $250 Million in financing in place, according to Britta Vander Linden, a spokesperson for Westchester County.

As of 4 PM, LCOR’s public relations agency, Quinn Incorporated has not returned a WPCNR call for confirmation of the start and finish date and sources of the financing. The City of White Plains has not issued a statement though asked.

County Executive Robert P. Astorino today announced that Westchester’s Industrial Development Agency (IDA) has approved amendments allowing a $250 million transit-oriented development of housing, retail and parking planned for a site just south of the Metro-North train station in downtown White Plains to proceed. The complex to be built at 55 Bank Street will create up to 533 new construction and permanent jobs.

“This project offers convenient, affordable housing for the county’s workforce near a transit hub that will get them to their place of work or wherever they want to go,” said Astorino. “This kind of private investment is moving Westchester forward, and was made possible by the Westchester IDA and the leaders at LCOR who realize the value of Westchester.”

The project at 55 Bank Street will be comprised of two 16-story apartment buildings to be constructed on a site currently occupied by a commuter parking lot. LCOR acquired the site from the White Plains Urban Renewal Agency. The 760,000-square-foot complex will include 449 market rental apartments, 112 affordable rental units, 6,300 square-feet of retail space and a 570-space parking garage. Construction is expected to begin in March.

“You don’t get a 561-unit apartment complex built without the collaboration of the Westchester County IDA,” said James Driscoll, senior vice president of LCOR Inc. “Thanks to County Executive Astorino’s economic development team, we look forward to supporting the continued revitalization of downtown White Plains, delivering housing along with parking and retail in a highly desirable transit location.”

(Editor’s note:) The project has been delayed 8 years because LCOR had not been able to find financing because of the economic conditions the last 7 years. It is not clear at this time whether LCOR has completed payments to the City of White Plains for the commuter parking lot on Bank Street where the project is to be built.

In September, the Common Council approved some minor amendments to the site plan. Here is a reprint of what WPCNR reported September 3: 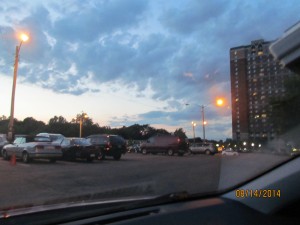 The national developer LCOR presented its revised site plan for two mixed use residential buildings on the 55 Bank Street site which currently is the city municipal parking lot. The site plain is a revision of a site plan originally approved by the Common Council in 2007 during the Delfino Administration.

The new LCOR proposal suggests two  16-story apartment rental buildings with 6,000 square feet of retail,  and 561 rental units with 20% of them designated as affordable housing. The North building would be built first, then after that the South structure will be started. A 120 room hotel is also viewed as part of the site, but is not firm at this time, however 86 parking spaces will be included for the hotel as part of the underground parking structure providing for the two buildings. Previously the parking structure was to be above ground.,

According to papers, LCOR is up to date on its payment for the commuter parking lot. However whether they have paid $16 Million as originally obligated, has not been confirmed by the city and the LCOR public relations agency , Quinn, Incorporated, previously declined comment on whether the commuter municipal parking lot property was completely paid for, or still owed the city money for the lot. LCOR negotiated the postponement of their last two payments until construction started, which is expected to begin “as soon as possible.”