↓
Home Menu ↓
Home→Photographs of the Day: President Walks Westchester Soil. Arrives on schedule; motorcades to fundraisers. Does Not Mingle with Press on Arrival.

The President is with us. 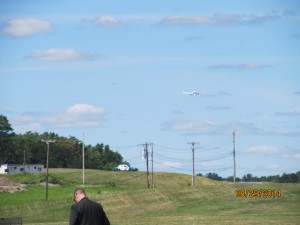 Air Force One on the horizon, a beacon at first, then the majestic dignified sweep of light blue wings! It sent chills up your spine at the promise, the dignity, the gravity, the responsibility of the office that every President brings with them everywhere they go.

Air Force One arrived as scheduled landing out of the northwest  this afternoon, first just a bright light in the puffy cloud blue horizon at 1:50 P.M. majestically touched down and rolled out on Runway 16, taxiing  back up the runway and pulled to a stop on Taxiway Charlie. 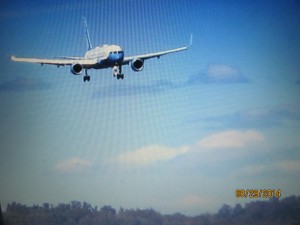 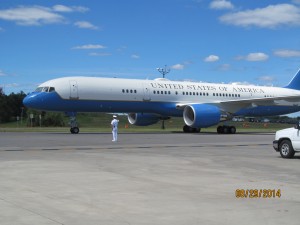 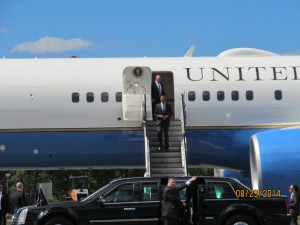 His awaiting motorcade entourage pulled up aside the plane as about twenty reporters watched from behind barricades 100 feet away.

The President emerged from the front of the aircraft, waved at the top of the staircase rolled up to the side of the plane, and  descended, businesslike to the tarmac, shaking hands with Ron Belmont, the Mayor of Harrison (the only official invited to greet the President at his plane arrival according to the Secret Service).

Without so much as an acknowledgement of the press, the President quickly entered his limousine. The motorcade pulled out in brusque, businesslike fashion on route to a fundraiser somewhere in Harrison with another  money maker scheduled in New Rochelle this evening. 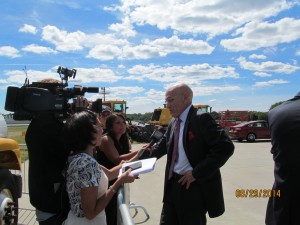 Ron Belmont, Mayor of Harrison fielding questions from the press about how you make small talk with the President of the United States. Mayor Belmont was the only official invited to greet Mr. Obama on arrival.

Ron Belmont told WPCNR the President was cordial,friendly, welcoming and told Mr. Belmont “what a wonderful area Harrison is.” Belmont was beseiged by the press for nuggets of Obama news after the motorcade left for its undisclosed Harrison fundraising party. But Mayor Belmont was very discreet.

Secret Service personnel advised reporters President Obama would be flying to Rhode Island for a fundraiser in Newport early Friday evening and returning to Washington D.C. for the evening after  the Newport function. He is expected to return to  to Westchester tomorrow afternoon to attend a wedding in Pocantico Hills.