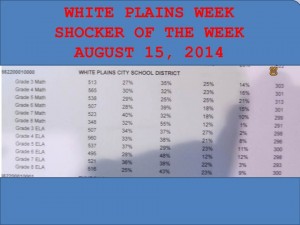 Math performance in the 8th grade level at the Middle School (students now entering high school in September) saw  32% of students passing at the Level 3 and above. In 7th Grade, 28% passed. In 6th grade, 33% passed.

In the Middle School, performance in passing ELA Common Core standards was worse.

In 2012-13  those sixth graders were in 5th grade, and 29% passed the first ELA Common Core Exam. Their  2013-14 ELA Common Core performance improved 4 percentage points in year.

(Editor’s Note:)To see the actual chart above go to

Scroll down to District number 662200010000. You will see the White Plains District Results for Grades 3 through 8 and results by White Plains School.

Comparison of the 5th Grade  and 8th grade Common Core assessments of 2013 show not much progress in passing the tests (prepared by the education giant publisher Pearson) by White Plains students and statewide.

The first time new 5th Grade Common Core aligned tests prepared by Pearson were administered in spring 2013, the number passing ELA from 2012(a different, obviously easier test) went down to 29%. A shock to this district as well as virtually every school district in the state triggered a wave of protest against the tests. White Plains “passing rate” went from  roughly over 50% down to 29% on both ELA and Math, producing an uproar.  In Math, the 2013 Fifth Graders passing math dropped to 28.2% — down 36%.

Not much improvement has been made in White Plains students being able to cope with the Pearson and Stated Education Department and Board of Regents vision of the kind of questions and skills needed to answer them to pass these state-prepared and approved by educators who know what questions children can answer.

In the official news release on the test results, the Commissioner of Education, John King, Jr. and the head of the Board of Regents, and educators across the state cited significant process here is that news release. (The Governor of the State of New York has no statement on the results in this release):

This year, for the first time, assessment results are presented based on the performance of all students who took an exam last year (2013) compared with those same students in the following year (2014) at the next grade level. This “matched students” approach focuses on growth in student learning and provides more useful data than an approach that compares the performance of one year’s students at a particular grade level against the next year’s cohort of students at that same grade level.  This matched approach is consistent with New York’s USED waiver from No Child Left Behind and New York’s teacher/principal evaluation system.  For Grades 3-8 ELA and math, students at Levels 2 and above are on track for current graduation requirements.  Students at Levels 3 and above are on track to graduate at the aspirational college- and career-ready level (indicating readiness to succeed in credit-bearing first year college courses).

“The test scores show that students from all economic, race, ethnicity and geographic backgrounds can and are making progress,” Tisch said.  “This is still a transition period.  It will take time before the changes taking place in our classrooms are fully reflected in the test scores. But the growth we see is directly attributable to the dedication and determination of so many classroom teachers and school leaders across the state. When school districts focus on providing the resources and professional development teachers need, their students do better.  Parents want the best education possible for their children, and the tests are one of multiple measures we need to make sure we’re moving in that direction.”

“New York has completed the fourth year of a 12-year Common Core phase-in,” King said.  “Like more than 40 other states, we’re in a period of transition; for us, that transition began with the adoption of higher standards in 2010.  We’ve invested millions of dollars in training to support educators to better prepare students for college and career success, and we will invest millions more in the years ahead.  These assessment results, along with our college- and career-ready high school graduation rate and NAEP scores, show we have a lot of important work ahead of us to ensure the success of all our students.  But with proper support and resources and an intense focus on continuous improvement of instruction, New York’s educators and parents will help our students develop the skills they need for success in the 21st century.”

Although there is some correlation between 2014 math and ELA performance and poverty, there are many examples of schools outperforming demographically similar peer schools.  See http://www.p12.nysed.gov/irs/pressRelease/20140814/home.html for a list of higher achieving schools and higher growth schools at both higher and lower levels of wealth.

These reports can be used to analyze student performance at the student, class, school, district, and regional levels. Earlier this month, the Department also released 50 percent of the 2014 Grades 3-8 ELA and math test questions (an increase from 25 percent for the 2013 tests), with detailed explanations for correct and incorrect responses (2014 annotated items can be found at https://www.engageny.org/resource/new-york-state-common-core-sample-questions ). Released test questions help teachers and families better understand how the standards were measured and the reasons why students may have responded incorrectly.

The Department continues to provide professional development support and resources for educators seeking to improve their understanding and implementation of the Common Core.  For example:

A summary of the test results, as well as individual school and district results, are available at:http://www.p12.nysed.gov/irs/pressRelease/20140814/home.html

Educators from across the State offer perspectives on the value of the data and how they’ll use it to inform instructional decisions:https://www.engageny.org/resource/educator-perspectives-3-8-grade-assessment-score-release

NOTE: Following are statements from educators and business leaders in reaction to today’s release.