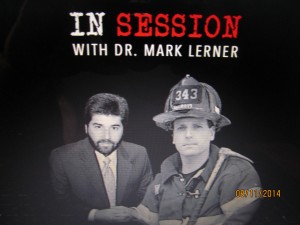 WPCNR STAGE DOOR. From the White Plains Performing Arts Center. August 11, 2014:
Premiering at the White Plains Performing Arts Center on September 5th and 7th 2014, to commemorate the anniversary of September 11th, Reality Theatre Productions™ presents, “IN SESSION with DR. MARK LERNER” featuring Firefighter Bobby Senn, Directed by Jeremy Quinn.
All proceeds will be donated to the 9/11 Tribute Center which funds the 9/11 Memorial at the former World Trade Center site and contributes to victims of 9/ll, the box office said. Tickets are $30 at the front of the house, and $20 at the back. Tickets may be purchased through the box office by calling 914-328-1600
Reality Theatre Productions™ is an innovative theatrical genre, created and originated by Executive Producer Mark D. Lerner, where real people share real stories that inspire and enlighten audiences. While improvisation is spontaneous and presented without preparation, Reality Theatre Productions is a neoteric, unscripted, structured theatrical genre.
“IN SESSION with DR. MARK LERNER,” featuring Firefighter Bobby Senn, marks the inception of Reality Theatre Productions. It is an auspicious production in which Dr. Lerner presents as a psychologist* and speaker.
Bobby Senn presents as a patient† and speaker who shares his story as a New York City Firefighter who survived the attacks on September 11th. This premier production features a special appearance by Broadway actor, David Gabriel Lerner (AEA).
While our nation is focused on mental illness, “IN SESSION with DR. MARK LERNER” fosters emotional wellness – an awareness, understanding and acceptance of one’s feelings and an ability to manage through challenges and change. This timely production “infotains” audiences with remarkable stories of distinguished people who have lived through and overcome adversity.