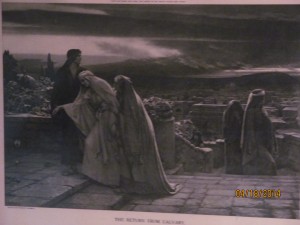 He died 2,000 years ago. There was no CNN, no internet, no newspapers,radio or television. No Twitter or Facebook.

Nevertheless the message of the man who died on Calvary spread around the world without mass communication.

He is Jesus of Nazareth.  He had no last name.

Whether you believe He is the Son of God, or not, he ranks as one of the foremost influences on mankind.

Such compassion for the downtrodden was unheard during the time He lived.

It was a time of slavery. No human rights. No care for the sick. When cities were razed and populations slaughtered or enslaved.

Jesus of Nazareth introduced a new philosophy that spread throughout the world after His death by crucifixation because the community leaders of his own people thought him a threat to their power.

If you live by his philosophy of foregiveness you are a person at peace with yourself. If you accept those who are different from you without  fear or prejudice, you are a force for spreading His message of peace towards others and good will.

I f you help the poor and the sick because you sympathize with them, you are following His way.

The Virgin Mother, weighted down by fatigue and grief, knowing not wither she goes, is being led up some steps, toward “his own” home, by St. John and Mary Magalene.

The grief so eloquently captured by this print depicts the very personal loss all of us endure when someone we love passes away because of all they did for us. Jesus of Nazareth was a human being who affects us to this day.

You do not have to second guess yourself, when you do what is right, humane, merciful, and serves the less fortunate without superiority.

His simple teachings have great power.